Your basic alligator has a large head, a lizard-like body, four stubby legs and a long tail.

American alligators are reptiles, and they are members of the Crocodylia ­order. In this order are 23 different species, including the American alligator, Caimans and a variety of crocodiles.

The basic Crocodylia body form has been around for over 180 million years, making alligators and crocodiles living dinosaurs. All of these animals have the same basic layout: big heads, long, lizard-like bodies, four stubby legs and long tails.

Male alligators are, on average, about 11 feet (3.5 meters) long and 600 pounds (270 kg). Females are, on average, about 8 feet long and weigh about half as much as male alligators. Males can actually get much larger -- 1,000 pounds is not unusual. At the Alligator Adventures alligator park in Myrtle Beach, SC, a very large crocodile named Utan weighs in at 2,000 pounds and is almost 20 feet long. He is claimed to be the largest living Crocodylian in captivity. (There is a nice interactive presentation on Utan available at the Alligator Adventures Web site.)

Alligators are fresh-water animals and can be found in lakes, ponds, rivers and irrigation canals. Because they are cold-blooded reptiles, alligators are not big fans of cold weather. This limits their range to the warmer, wetter areas in the southeastern United States from Texas to North Carolina.

While there are reports of one alligator, held in captivity, that lived to be well over 100 years old, something like 40 years might be a more typical old age for alligators living in the wild. 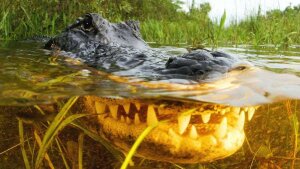 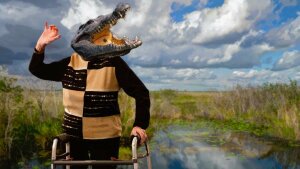 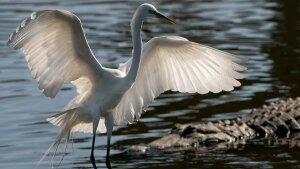