Browse the article Did crocodiles descend from dinosaurs? 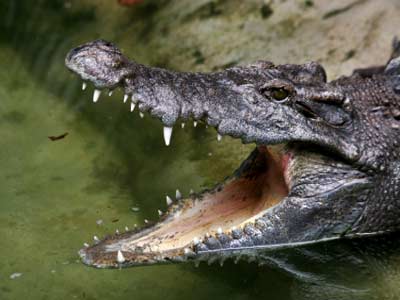 There are 23 species in crocodile family. See more pictures of reptiles.
©­iStockphoto/podgorsek

­Crocodiles are built to last. Evolving around 200 million years in the Mesozoic epo­ch, crocodiles have far outlived the dinosaurs. Scattered across more than 90 countries, 23 species of the Crocodylia order haunt freshwater rivers, streams and marshes. Those 23 crocodilian separate into three families: alligatoridae (alligators and caimans), crocodylidae (crocodiles) and gavialidae (gharials).

Voluble crocodiles exhibit a range of calls signaling anything from courtship to distress [source: Florida Museum of Natural History]. They swim through their habitats chomping on frogs, fish, turtles and other vertebrates. To help them float, many crocodiles will ingest rocks to weigh down their centers of gravity [source: Burton and Burton]. Evolutionary biologists suspect that crocodiles' aquatic nature may have helped them survive the theoretical asteroid impact that led to the extinction of dinosaurs.

­But if crocodiles and dinosaurs were living in the same time period, how closely we­re they related? For starters, dinosaurs and crocodiles are both reptiles. They share cold-blooded circulations that rely on the environment to heat and cool. Physical similarities, such as their rubbery skin and fierce teeth and claws are also apparent. But if you've read How Dinosaurs Work, you know that many scientists agree that birds, not crocodiles, descended from dinosaurs. Yet, we also know that bir­ds and crocodiles are the only extant species that share a common ancestor with dinosaurs.

If we take a closer look at the crocodile's family tree, some surprising animals are hanging out on the various branches. Crocodiles are members of the Reptilia taxonomic class with other creepy crawlers, including snakes and lizards. And according to paleontologists, birds are also lumped in that category. In fact, crocodiles are more closely related to birds than they are to snakes and lizards [source: University of California Museum of Paleontology].

With a little more investigation into this unlikely bond between croc and bird, we can find out where dinosaurs fit into the prehistoric family portrait. 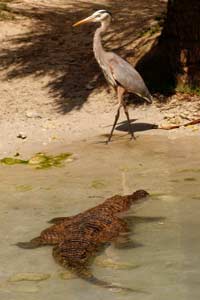