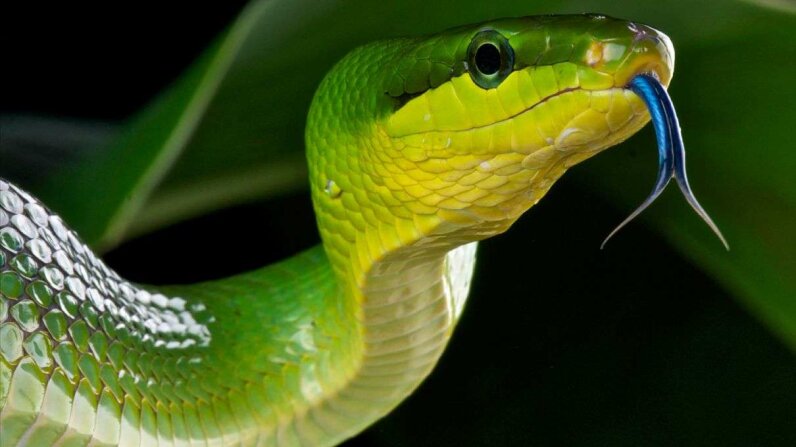 When they sense the bats are on the move, certain types of snakes slowly emerge from their hiding spots and strike, catching the bats in midair with their mouths. eptiles4all/iStock

If you thought the premise of "Snakes on a Plane" was absurd, check this out. In what we can only imagine is one of the creepiest caves in Mexico, snakes have adapted to a world of complete darkness and developed an ingenious way of capturing their evening meal.

The limestone rock in the cave is porous, allowing the snakes to hide — and essentially live — among the countless holes along the ceiling and walls. When they sense the bats are on the move, the snakes slowly emerge from their hiding spots — and strike, catching the bats in midair with their mouths as they fly past. For the snakes, it's about as close to mealtime delivery as it can get.

The strange phenomenon was discovered by Instituto Tecnológico Superior de Felipe Carrillo Puerto professor and biologist Arturo Bayona, who's known to many as Mexico's Darwin. His passion for local wildlife and biology is what led to the find, which he dubbed the “Cave of the Hanging Snakes.”

But Mexico isn't the only place where snakes are hanging out in caves with bats — literally. It's also been documented in caves in Thailand where Ridley's Racer snakes (Orthriophis taeniurus ridleyi) have been known to scale walls and snatch bats out of the air. And in the subtropical forests of Puerto Rico, 7-foot- (2-meter-) long boa constrictors have developed a similar method of stalking their prey and have turned the caves there into all-you-can-eat bat buffets.

The most impressive display of boas is at the "Cave of the Long Snakes" (La Cueva de Los Culebrones), where there are an estimated 300,000 bats, providing quite a spread for the boas who come to chow down.

You can check out these hair-raising caves from the safe confines of your computer—there are a few fascinating videos of the Cave of the Hanging Snakes and the Cave of the Long Snakes. But if you want to really get up close and personal, several eco-tourism groups offer treks deep into the rainforests of the Yucatan where you can explore the caves of Kantemo, snakes, bats and all. (Um, we'll take a pass this time.)

Now That's Cool
The snakes of Mexico’s Cave of the Hanging Snakes don't seem bothered by their curious human visitors — they go about their nightly ritual seemingly unaware they are being watched.