Sea Snakes Can Be More Venomous Than Rattlesnakes 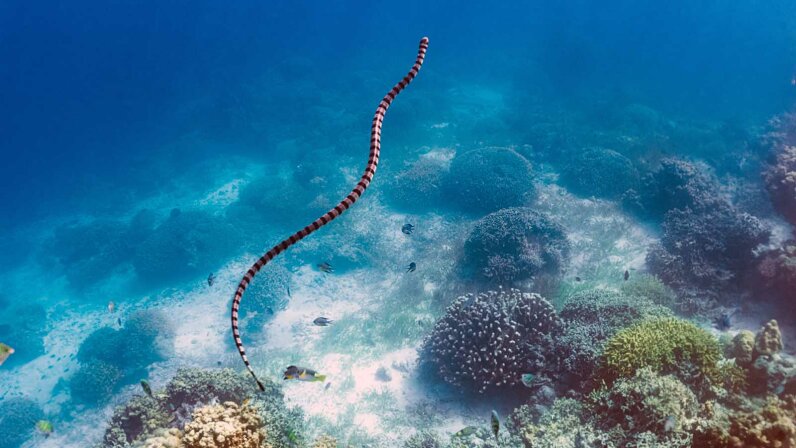 Banded sea kraits, like this one in the Philippines, are part of the cobra family (Elapidae). Matteo Colombo/Getty Images

Every so often, yellow-bellied sea snakes tie themselves in knots. They — like all serpents — must regularly shed their skin. But the process demands friction, and in the open sea, it can be hard to find a rock or reef to rub up against.

So the animals play contortionist. Twisting coils around coils, they peel off old skin in an acrobatic looping maneuver. The exercise has a nice side-effect: Barnacles, oysters and other tiny hitchhikers plague these snakes. Frequent sheds keep their numbers down.

If you're an armless, legless air-breather, life in the ocean is fraught with challenges. Yet the 50-plus sea snake species alive today use all kinds of amazing tricks to get by.

A snake at sea isn't automatically a "sea snake." Lots of unrelated species frolic in our oceans from time to time. Reticulated pythons, for example, will swim between islands along the coasts of southeastern Asia — crossing distances that could wear out an Olympic gold medalist. That doesn't, however, make them sea snakes.

When naturalists talk about "sea snakes," they're usually referring to two very specific groups of reptiles that are part of the cobra family (Elapidae): true sea snakes (Hydrophiinae) and sea kraits (Laticaudinae).

We've already met one of the former species. Yellow-bellied sea snakes, those oddball knot-tiers, are classic hydrophiids. True sea snakes like these have sworn off dry land altogether. Fully marine, they give birth to live young at sea. And scientists recently learned that Australia's Cleveland Bay is a biological nursery where pregnant spine-bellied sea snakes come to deliver their broods.

Terrestrial births just aren't an option. Hydrophiids never exit the water voluntarily because they lack the wide belly scales other snakes use to crawl over solid ground. Drop one on a beach and the poor creature will struggle to move under its own power.

Sea kraits are a bit less streamlined, but they're more competent on land. They mate, shed and digest some of their meals outside the water. Equipped with the requisite belly scales, the animals are free to hit the turf — and like sea turtles, they lay eggs in beachside nests.

Banded sea kraits spend much of their time underwater hunting, but return to land to digest, rest and reproduce.
Giordano Cipriani/Getty Images

Now the similarities between these groups far outweigh their differences. All sea kraits and true sea snakes have paddle-shaped tails that help them zip through the water.

They're also venomous, but seldom kill human beings. In fact, the animals tend to be docile around people. Bites usually happen when a snake feels trapped and stressed out; one banded sea krait fatally bit a man in 2018 after a fishing net ensnared it.

Most sea snakes inject their venom through hollow fangs at the front of the mouth. Rather than waste its ammo, a frightened sea snake will often administer "dry bites" — striking its foe without releasing precious venom.

Give them a wide berth anyway. Neurotoxins in sea snake venoms attack the victim's nervous system. Paralysis, spasms and respiratory problems may occur as the chemicals do their work.

Fish are the main food source for the vast majority of species. Sometimes, it pays to let dinner come to you: The yellow-bellied sea snake lies motionless at the ocean's surface, waiting for careless fish to take refuge under its coils before grabbing them.

Other snakes drag fish out of the cracks and crevices in coral reefs. Such hiding places are frequented by eels, the banded sea krait's favorite prey. While morays can be dangerous game, kraits immobilize them with venom and then swallow the creatures whole.

A few species — like the spine-tailed sea snake — eat only fish eggs. These specialists have tiny fangs and (at least) one of them carries exceptionally weak venom. Caviar can't swim away, so there's no need to give it paralysis.

Seawater isn't something laticaudids and hydrophiids can drink. So they need to keep hydrated by other means. Sea kraits have been observed licking fresh water droplets off plant leaves when they come ashore. And after a storm, they sometimes gather on islands to drink from puddles.

When it rains over the ocean, an interesting phenomenon happens. New-fallen drops congregate at the surface to form a temporary — and drinkable — "lens" of fresh water. Yellow-bellied sea snakes use the lenses to quench their thirst, zeroing in before the rainwater gets inundated with too much salt.

Both sea kraits and true sea snakes have valves that can seal off their nostrils and keep out water during dives. Some species are known to stay underwater for three and a half hours on end. None of these guys possess gills — but in 2019, researchers learned the blue-banded sea snake (a "true" species) uses intricate blood vessels on its head to pull oxygen straight out of the water. Not a bad superpower.

Sharks, crocodiles and some birds of prey will eat sea snakes if given the chance. To confuse attackers, the yellow-lipped sea krait has evolved deceptive markings that make the end of its tail look like a second head.

Olive sea snakes, which are the most common sea snake along the northern coast of Australia, breathe air, but unlike sea kraits, which nest on shore, the olive sea snake spends its entire life in the ocean.
Tropic Pixel/Getty Images

Snakes in the Ocean

Pollution is another big threat, especially to snakes who swim and feed near industrial sites.

Long before humans started contaminating things, sea snakes had spread out across the Pacific and Indian Oceans. Two landlocked lakes in the South Pacific — namely Lake Taal of the Philippines and Lake Tenago in the Solomon Islands — have their own resident species as well.

Just don't bother looking for them in the Atlantic.

Earth's second-biggest ocean is free of all sea snakes. Geography and climate may explain why. Scientists think the reptiles' ancestors evolved in the western Pacific 6 to 8 million years ago. By the time modern species reached the New World, the Panama land bridge between North and South America might've closed up.

Cold water kills sea snakes, so they'd have been unable to swim around South America's Cape Horn. Meanwhile, Africa's southeastern coast gets very little rainfall. Any sea snake foolish enough to hang out there would have a difficult time staying hydrated.

Even survivalists have their limitations.

You might not like sea snakes, but the mimic octopus sure does. By changing its color and burying some tentacles in the ocean floor, this mollusk tricks wannabe predators into mistaking it for a banded sea krait.