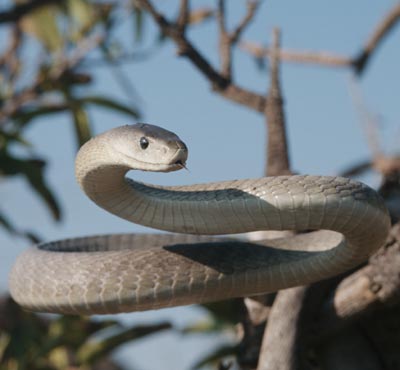 The fear of snakes, ophidiophobia, is one of the most widespread phobias in the world. There are many types of harmless snakes, but the venom from some poisonous varieties can kill a person. The following snakes have the most potent venom.

The worst of the worst is this four-foot-long waterborne menace that lives along the coastlines of South Asia. The hook-nosed sea snake doesn't attack humans often, but when it does, just 1.5 milligrams of its venom can cause death. Its preferred prey are fish, which the snake paralyzes with its venom.

This three- to five-foot yellowish-brown snake is frequently found in Pakistan, India, Southeast Asia, and China. The Russell's viper preys primarily on rodents but will also kill cats, squirrels, crabs, and even scorpions. Its bite causes pain, swelling, and bleeding, as well as decreased blood pressure and heart rate.

Averaging nearly six feet in length, this snake lives in dry regions of Australia. An average bite from an inland taipan is estimated to have at least 50 lethal human doses. Fortunately, it shies away from people and dines on rodents, which it subdues by striking quickly and hanging on until they die. In contrast, it releases larger prey after biting them to avoid getting hurt in a struggle--but it tracks them down after the venom kicks in.

This treacherous swimming snake is found from the coasts of western and northern Australia to the islands of New Guinea and New Caledonia. Although the Dubois's sea snake has one of the deadliest venoms known, its bite delivers less than one-tenth of a milligram--more than enough to kill a mouse but generally not enough to kill a person.

Another species native to Australia, the Eastern brown snake averages three to four feet in length but can grow longer than six feet. This aggressive land snake injects very little venom when it bites, but it's still enough to cause rapid death in its victims. It eats mostly small mammals, such as rats, mice, and reptiles, but will also eat eggs, birds, and frogs.

This nasty serpent from southern and central Africa is actually a greenish-yellow or gray; its name comes from the color of its mouth. One of the quickest and largest deadly snakes, it averages 8 feet long but can grow to more than 14 feet. The black mamba preys on small mammals and birds, delivering small, fast bites. If it attacks a person, as little as two drops of its venom can cause dizziness, rapid heart rate, and shallow breathing. Some of its human victims have fallen into a coma and died.

Africa's savannah grasslands are home to the deadly five-foot boom-slang, which eats chameleons and other lizards, as well as birds and their eggs. Even small amounts of its venom can kill a person; the victim experiences nausea, dizziness, and a deceptive recovery before sudden death from internal hemorrhaging.

This deadly snake is found across India, Pakistan, and other parts of southern Asia. It is not aggressive, but if alarmed it will bite and inject its venom, which can cause sleepiness and respiratory failure, killing most human bite victims who don't receive antivenin. Kraits, which average around four feet long, eat not only small lizards but also snakes--including other kraits.