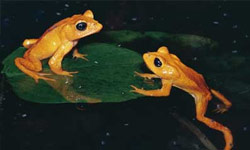 Amphibians are a class of the animal kingdom that includes toads, frogs and newts. The word amphibian comes from the Greek word meaning, "a being with a double life." Amphibians are so called because they have two stages of development -- the larval stage and the adult stage. For example, tadpoles are the larval stage of frogs. Most amphibians also live both in and out of the water, although some amphibians live only in water and some only on land [source: St. Louis Zoo]. These creatures are fascinating animals with distinct features and unique characteristics. Read the tips listed below and learn about how to identify the amphibians in your region.