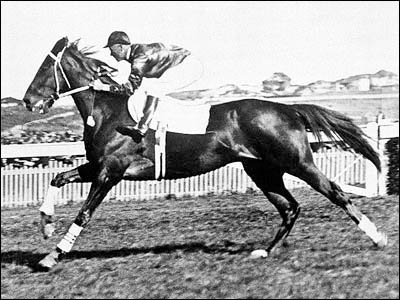 New Zealand-bred Phar Lap (which means "lightning" in Thai) became a national icon in Australia, where he primarily raced during his four-year career. The monstrous horse measured a staggering 17.1 hands high while his heart weighed 13.7 pounds, significantly more compared to the average horse heart weight of just 9 pounds.

Phar Lap netted 37 wins across 51 races, and set eight track records before his mysterious death in 1932 after suddenly becoming ill. Many speculated that U.S. gangsters, who feared the champion would trigger big losses for their illegal bookies, had poisoned the horse. Forensic investigations conducted over 70 years later would go on to prove that Phar Lap did ingest a large dose of arsenic shortly before his death, though the source was never proven or found.