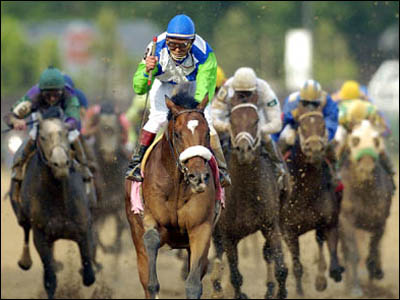 In 2006, Barbaro entered the Kentucky Derby undefeated, and his 6-1/2-length margin of victory at the event marked the largest in nearly 50 years. Prior to this win, he had also nabbed top honors at the Florida Derby, Holy Bull Stakes, and Tropical Park Derby.

His impressive record had many believing he was the most serious Triple Crown threat to hit the track in years, but two weeks later at the Preakness Stakes, Barbaro fractured three bones in his right hind leg, bringing his racing career to a devastating halt. While his right leg would go on to heal after multiple surgeries, Barbaro later developed laminitis, a painful hoof condition, in both his front legs.

His death in 2007 created an outpouring of grief from fans across the nation, as well as the establishment of an equine health fund by his owners in his honor.