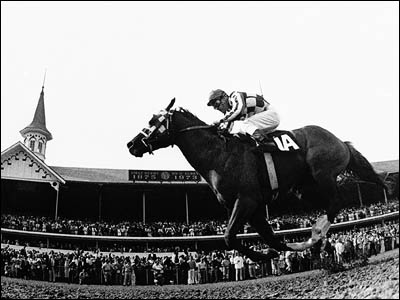 Secretariat was born in 1970 and at first considered "too pretty" to be a good racehorse. During his first season in 1972, he proved any early doubters wrong, claiming eight consecutive victories and becoming the first of only two 2-year-olds to ever be crowned Horse Of The Year. The following year, he won the Triple Crown, and took the Belmont Stakes by 31 lengths, a new world record time which still stands today, along with his record set at the Kentucky Derby.

Secretariat was mourned by millions following his death in 1989, and given the rare honor of being buried whole - normally, just the head, heart, and hooves are laid to rest, though in Secretariat's case, his heart alone weighed around 22 pounds, nearly twice the size of a normal horse!

He was one of only three non-humans ranked on ESPN's "100 Greatest Athletes of the Twentieth Century", and was also honored in 1999 by the United States Postal Service who issued a stamp bearing his likeness.