by Alia Hoyt
Prev NEXT
9 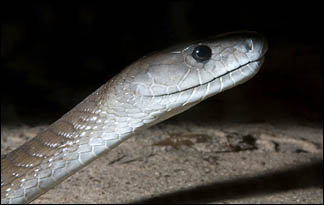 Africa is home to some pretty intimidating predators, but the most fearsome animal may well be the black mamba, the giant venomous snake found throughout the southeastern portion of the continent. Averaging a spine-chilling 8.2 feet in length, the mamba gets its name from the black skin on the inside of its mouth, which the mamba displays just before it strikes. These animals are usually quite shy, but can be extremely aggressive (and thus terrifying) when confronted. When they do attack, they tend to strike their victims repeatedly, releasing a lethal mix of neurotoxin and cardiotoxin. In the past, a bite from a black mamba was 100 percent fatal. Now, that figure is decreasing due to the use of anti-venom throughout the continent. Still, best to avoid these bad boys!