by Alia Hoyt
Prev NEXT
4 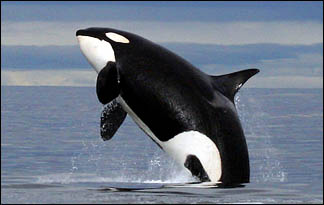 Orcas, better known as "killer whales," are deadly predators, combining remarkable skill with awesome physical power. Indeed, orcas have a number of ingenious techniques in their hunting arsenal, giving them one of the most diverse diets of all aquatic predators. For example, they are fond of knocking seals and penguins from ice floes in order to seize them as they fall into the water. They have also been known to intentionally beach themselves in order to reach seals onshore. Highly social animals, killer whales tend to live in pods made up of dozens of individuals working cooperatively to snag prey. Some have even been known to successfully hunt and feed on great white sharks, which is just a whole new level of vicious.