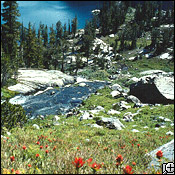 Climbing a mountain is like traveling northward: For each 650-foot (200-m) -rise in elevation, the average temperature drops about two degrees Fahrenheit (1°C). This is because the atmosphere becomes thinner the farther away it is from Earth's surface and thinner air is able to hold less heat. As well, cold air holds less moisture than warm air, so as air rises and cools, it gets drier, causing biomes to gradually change with elevation, in some cases paralleling the shift in biomes — from rain forest to temperate deciduous forest to coniferous forest to tundra — that occurs as one travels from the equator to the north pole.

Another factor that contributes to the change in climate is the effect of mountains on trade winds. When trade winds carrying clouds are forced upward by mountains, they release rainfall at higher levels. In the tropics and subtropics, when the mountains intercept warm, moist air from the sea, a "cloud forest," or montane rain forest, may be created, typically at sixty-five hundred to ten thousand feet (2,000 to 3,000 m). Unlike the vegetation of a tropical rain forest, which is characterized by a tall canopy, the vegetation of a cloud forest is dominated by short, crooked trees, mosses, masses of epiphytes, and a rich ferny understory.

Above this moist belt of vegetation lies the alpine tundra. The point where this line begins varies greatly according to the climate of the region. For instance, on certain mountains in Scandinavia, the tundra line occurs at altitudes of two thousand feet (600 m), while on mountains in Venezuela near the equator, the tundra line occurs at about thirteen thousand feet (4,000 m). At these heights, strong, uninterrupted winds create chill factors of devastating proportions. The miniature juniper forests of the Colorado Rockies are good examples of trees on the "front lines" of the alpine tundra. Twisted and bent by wind and ice, the junipers actually shift position, loosening and regaining their grip on rock.

The mammals that inhabit the higher altitudes deal with cold in a variety of ways. The larger ones, such as the mountain sheep (Ovis canadensis) and its predator the mountain lion (Felis concolor), descend to warmer pastures in the autumn, while many smaller mammals hibernate or take shelter. For instance, the meadow vole (Microtus pennsylvanicus) is active year-round, inhabiting a labyrinth of burrows under the snow. For these mammals, survival in low temperatures means maintaining a very high metabolic rate.

Large size is a more economical way to combat the cold. A greater overall mass in relation to surface area means valuable heat is more effectively retained. Size combined with thick fur insulation enables alpine species such as the mountain goat (Oreamnos americanus) to inhabit regions above the tree line year-round. Specialized hooves aid such mountain ungulates in coping with rocky terrain and steep cliffs. Those of the mountain goat are almost pincerlike. They open and close, serving as brakes during a descent or as a grip on a rocky ridge. A textured, cushioned foot pad provides the hoof with secure, suction-cuplike traction.

Finally, as any climber knows, the rarified oxygen content of thin mountain air poses breathing challenges. In response to this, the Andean vicuna (Vicugna vicugna) has developed a form of hemoglobin with an enhanced affinity for oxygen. This trait, coupled with its remarkably thick fur, makes the vicuna one of the highest-living mammals, inhabiting lofty alpine summits more than sixteen thousand feet (5,000 m) up.

Ready for the first mammal? Check out the Alpine Marmot.