What if an astronaut took his/her pet bird into space? Would it still be able to fly? 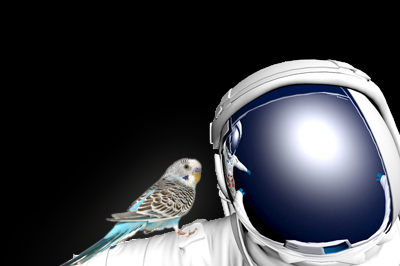 The coolest part about a spaceship or space station orbiting Earth is the weightlessness. It's cool to humans because in weightlessness anyone can fly. You simply kick off of a wall and you can fly in a straight line to the other side of the ship without any effort. If you've seen video of astronauts clowning around on the space shuttle or in the space station, then you know that it looks like a lot of fun!

The big advantage that a bird would have over human beings in this situation is its wings. Inside a space station full of air, the bird's wings and tail would still work fine. So the bird can turn, accelerate and decelerate mid-flight. Humans can't do this -- once a human kicks off the wall, the flight is pretty much a straight-line until the human hits the opposite wall. Birds would have a tremendous amount of control while flying in the space station if they used their wings and tails properly, although they would have to make some serious adjustments to compensate for their weightlessness.

The lingering, unknown question is this: Is a bird smart enough to adjust to things in a zero-gravity environment? Or is flying in gravity so instinctive that a bird can't adjust? Birds are remarkably smart, so chances are that a domesticated bird would figure it out with a little practice.

5 Mammals That Are Adorable … and Toxic
Could a platypus poison me?
12 Regal Facts About Siamese Cats