Did a Russian lake flash-freeze a herd of horses? 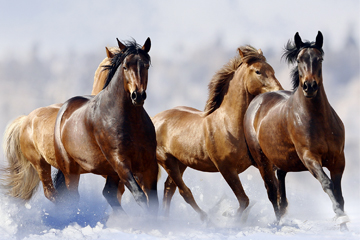 It's cool, although highly morbid, to imagine a herd of horses flash-freezing in a lake. But is that even possible?
mari_art/Thinkstock

So here's the thing: We have a pretty leading question to deal with. While none of us probably relishes the idea of horses dying a miserable, suffocating death in a frozen lake, it's only human nature to think, "But if those horses did suddenly freeze on contact with the lake — into a terrible, macabre ice sculpture garden — well, that would be kind of cool." We won't judge. Science isn't always sterile beakers or butterflies flapping. Weird science can happen in morbid situations. But is this mass horse grave legend one such instance?

First, let's establish the story. Curzio Malaparte was an Italian journalist who wrote a book called "Kaputt" about his experiences covering the Eastern Front during World War II. Included in the book is a poetic (and frankly disturbing) account of watching horses, fleeing a forest fire, mind you, plunge into the very cold Lake Ladoga, located on the Russian-Finnish border. A sudden wind shocks the water into a swift flash-freeze, which in turn freezes the rearing horses in place. There they remain, throughout the frozen winter, a band of "hundreds upon hundreds" of horses' heads, frozen on the surface of the lake while their bodies remain invisibly packed in the ice below [source: Malaparte].

Is it possible for a body of water to flash-freeze suddenly? Sounds insane, considering that we all know water freezes at 32 degrees Fahrenheit (0 degrees Celsius). But here's where science smacks us upside the head, reminding us that nothing is as it seems. Pure water needs a little help to become ice; it doesn't quite settle into the pretty formation that easily. It needs something like dust added in so that it can build around it and kick-start the crystalline ice structure. Absent any impurity in the water, it'll just get really, really cold. Below freezing, in fact, but without any actual ice formation. All it will need is a shock or impurity to crystallize suddenly. And so yes, in theory, a Russian lake could flash-freeze should horses abruptly plunge into it [source: Radiolab].

But ... probably not, because the water would have to be extremely pure (lake water is not known for its purity, as anyone who's ever peed in a lake would tell you). Adding to the skepticism? Malaparte's "Kaputt" is a blend of fiction and fact; it's a surreal narrative that doesn't hold entirely to journalism. So while it's possible a Russian lake flash-froze a herd of stampeding horses, it's pretty unlikely.

How Earthworms Work
The Brown Recluse Spider: Its Reputation Is Worse Than Its Bite
Frog Romance Just Got a Little More Interesting