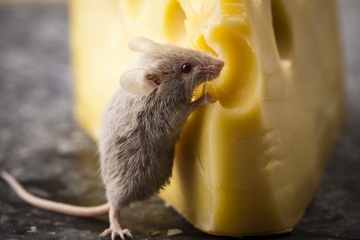 'Tom and Jerry' will forever be near and dear to our hearts, but was it actually based in fact? Was Jerry's interest in cheese grounded in reality?
Sebastian Duda/Thinkstock

Contrary to popular belief, mice really aren't all that crazy about cheese. Sure, they might eat it if there's nothing else around -- a hungry mouse can't be too picky -- but it's far from his favorite food.

Despite the love lost between mice and cheese, the image of a mouse in desperate search of a hunk of cheese to nosh on permeates pop culture, from Shakespeare to "Tom and Jerry" cartoons. While it's unclear where this myth originated, it likely dates back to the middle ages, before the invention of modern refrigeration. Back then, food storage was much more complex than simply sticking something in the refrigerator. Medieval families hung meat from hooks on the ceiling, stored grains in bags or bins and left large wheels of cheese out with just a coating of wax or a layer of cheese cloth for protection.

During this period, it's possible that hungry mice simply dug into whatever food they could access. Meat hanging from the ceiling was tough to reach, so mice likely noshed on grains and cheese. Stealing a few morsels from a bag of grains leaves little evidence in many cases, while biting into a hunk of cheese leaves behind tell-tale teeth marks. This evidence may have spurred the idea that mice love cheese, even if they were actually only eating the cheese because it happened to be accessible [source: Mirsky].

Another theory to explain the mouse-cheese connection is based solely on image. There's just something convenient about sketching a mouse lingering near a perfectly-triangular wedge of cheddar, complete with just a few holes for decorations. It's a much more effective image than a mouse and a dab of peanut butter or a few grains of rice. Perhaps this image simply worked well for animators and cartoonists, who've helped to perpetuate this myth through the years [source: Mirsky].

So if mice don't like cheese, what do they prefer to eat? Think sweet! Mice prefer to dine on sugary foods, including fruit, grains or even chocolate if it's available [source: Royal Society for the Prevention of Cruelty to Animals]. If you're trying to bait a mousetrap, a little something sweet will almost always provide greater success than even the finest variety of cheese. The discerning mouse is likely to turn his nose up when offered cheese thanks to its not-so-subtle odor and flavor [source: BBC News].

If you happen to have a pet mouse, keep in mind that feeding him cheese could even be harmful as cheese is not a natural part of the mouse diet. Stick to fresh fruits and veggies along with high quality mouse pellets to maximize nutrition, with a few sweets and grains thrown in as an occasional treat.

Why Goldfish Make Their Own Alcohol
Can wearing magnets really repel sharks?
Changing Livestock Feed Might Help Save the Planet