by Kristen Hall-Geisler Feb 18, 2020
Seventy-one percent of pet owners leave music on for their furry friends when they leave them alone. walik/Getty Images

Maybe you think your dog likes to rock out to Led Zeppelin. Or you think your cat won't be so lonely if she listens to the Beatles. Perhaps you leave music on when you're out because you hope it makes your furry friends feel comfier while you're away at work. Or you just do it to mask the sound of the mail carrier so maybe — for once — the dog won't leap onto the couch and bark his fool head off.

If you leave music on for any of these reasons, you're not alone. Spotify says you're one of the 71 percent of pet owners who does so. Never one to let a demographic go un-serenaded, Spotify now has playlists just for those pets.

That's right. You can visit the Spotify for Pets page and even pick your species: dog, cat, hamster, bird or even iguana. Sorry snake lovers. There's no playlist for reptiles, or tarantulas or goldfish because, Spotify says, well, they don't have ears. Surely the case could be made for a bass-heavy playlist these guys could groove to using the vibrations in their tanks. Am I right?

Once you've picked your pet, you answer a few questions about their personality: playful or sleepy? Friendly or shy? Then the secret algorithm sauce creates a playlist your animal friend surely will love.

The algorithm isn't really all that secret. Spotify conducted a survey of 5,000 pet owners who also stream music. That's how we know that 69 percent of pet owners sing to their animals. Which means the other 31 percent of you are humorless monsters. Spotify also found that people think playing music for their pets reduces stress and that their animals like the same kind of music they do.

Spotify also put some art and science into the algorithmic sauce. Cellist David Teie, who performed with the National Symphony Orchestra for 20 years, composed two albums of Music for Cats. The 12 minutes of "Potato's Song," which has a soothing low purr and rhythmic suckling sounds in addition to strings, has been viewed nearly 85,000 times on YouTube. Teie also curated the Mellow Meowsic playlist for Spotify.

To human ears, it might sound a little odd. But Charles Snowdon, a psychology professor at the University of Wisconsin-Madison put Teie's music to the test. Snowdon and his student Megan Savage visited 47 cats in their homes. They played recordings of two of Teie's compositions and two classical songs intended for humans. They found that the cats showed more positive responses to the cat songs, like purring and approaching the speaker, than they did to the human songs.

Snowdon pointed out that animals and humans don't hear all the same frequencies of sound, so some of the music we play for them doesn't even register. And some of our favorite songs don't even register as music to animals; it can just sound angry to them.

But that didn't stop Spotify! They combined this science with the survey data and each particular user's own music playlist to create one that both the human and the pet will theoretically enjoy. If the animals can hear even it, that is.

Now That's Some Monkey Business
Snowden and Teie first tried out species-specific music on the cotton-top tamarin monkeys living in the University of Wisconsin's department of psychology. Snowdon recorded sounds of distress during their vet appointments and reassuring chirps. Teie used the samples to create songs, and the songs were played for the colony. Similar to the cats in the later experiment, the tamarins liked the reassuring songs and were afraid of the distressing songs. Classical songs played as controls were basically ignored.

What Caused the Rise – and Fall – of the Ottoman Empire? 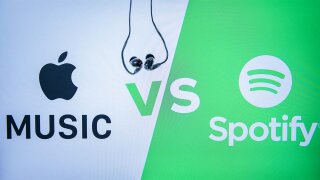 5 Differences Between Spotify and Apple Music 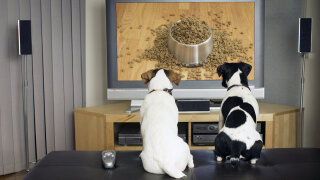 DOGTV: The HBO for Fido? 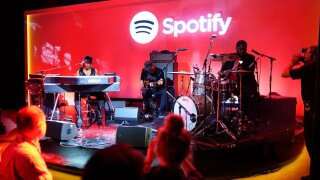 Spotify Would Really Like to Make You a Mixtape, Please