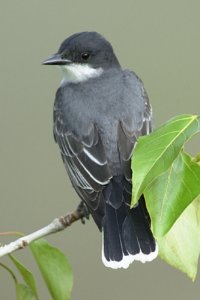 Bird Spotting: With a black head, back, and wings, and white on the tip of the tail, chest, and belly, the eastern kingbird would look like a black and white photo were it not for the occasional uncovering of a spot of red, orange or yellow feathers in the middle of its crown. This bird is known for its upright posture.

Habitat: Contrary to its name, the eastern kingbird can be seen in the skies throughout North America as well as in the Amazon. This bird enjoys open areas during breeding season, but in winter will make its home along rivers and lakes.

Bird Bite: Extremely aggressive, kingbirds live up to their name. These birds will defend their nest even against much larger birds.

Backyard Tip: The fruit of the common sassafras tree is a preferred menu item of the eastern kingbird.

Why Does the Kookaburra Laugh?
What the Cluck? How a Hen Turned Into a Rooster
Penguins: The Monogamous Tuxedoed Birds That 'Fly' Underwater