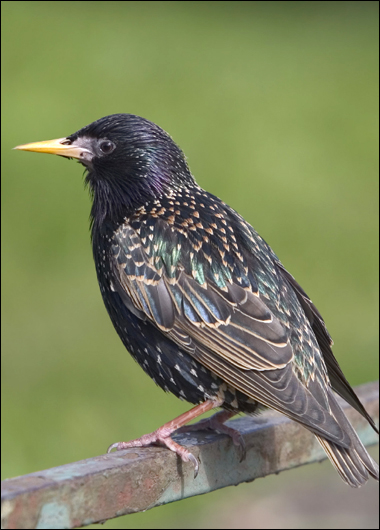 Bird Spotting: Smaller than a robin, this black bird turns a striking iridescent purple and green in the spring. Their bills are long, pointed and yellow in the summer, but turn darker in the fall and early winter. Male and female birds look similar with only slight variations depending on the season.

Habitat: The European starling adapts well to different environments and can be found in fields, agricultural areas or cities.

Nesting: European starlings lay four to six eggs in nests constructed of twigs, grass, string, plastic and other bits of trash. Nests are placed in cavities 2 to 60 feet above ground with 10 to 25 feet being the average.

Bird Bite: As its name suggests the European starling is indigenous to Europe. The birds were introduced into America in the early 1890s by the American Acclamation Society, which released 100 individuals in Central Park, in New York City. This organization sought to introduce the American public to all the species of birds mentioned in the works of William Shakespeare. (The starling makes an appearance in Henry IV.) Since this parochial beginning, the European starling has spread throughout the United States and numbers approximately 200 million birds.

We Need to Know Why the Female Bird Sings
Penguins: The Monogamous Tuxedoed Birds That 'Fly' Underwater
These Little Sparrows Judge Potential Mates on Dance Moves, Not Song