by Colleen Cancio
Prev NEXT
7

Pigeons and Doves Are Divine 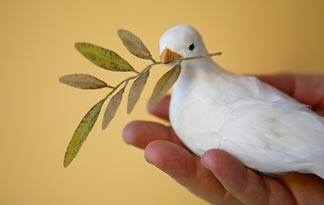 Pigeons have been important symbols in religious writings, but does this make them divine?
Corbis/Getty Images

Again, this myth is difficult to discuss rationally, but we felt we had to include it in the list since pigeons and doves (same family, different species) appear so often in scripture and the writings of the ancient world. Whether serving as sacrifice in Jewish tradition or as Noah's messenger on the ark, pigeons and doves play a central role in the lore of the world's religions.

Pigeons and doves also represent peace, purity, faith and fidelity in numerous cultures around the world. Why the birds hold such a sacred place in human societies is difficult to discern, but pigeons are no more or less likely than other animals to guide us to the hereafter.