The Toucan Is Far More Than the Froot Loops Mascot 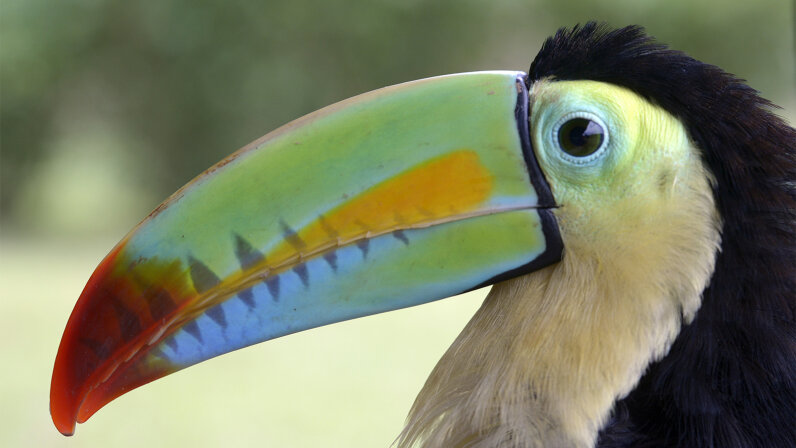 The keel-billed toucan or rainbow-billed toucan (Ramphastos sulfuratus) is found in tropical jungles from southern Mexico to Colombia and is the national bird of Belize. DEA/V. GIANNELLA/De Agostini/Getty Images

Toucan Sam, that bird with the horn-shaped, rainbow-striped bill on the Froot Loops cereal box, made the toucan recognizable to generations of people who have never even been to the neotropics. The toucan's undeniable graphic appeal led to its dramatic profile gracing advertisements decades before Toucan Sam began following his nose. Toucans have been used to promote everything from Guinness beer in the 1930s to the Brazilian Social Democracy Party in the 1980s. Which is why advertising legend Peter Lohmeier chose the bird to represent a fun, colorful, exotic (at least by the standards of the early 1960s) cereal.

But toucans, in actuality, don't have anything to do with beer, democracy or cereal, although they definitely concern themselves with fruit.

Toucans are a group of social birds native to Central and South America. They spend their days doing what any good frugivore (or fruit-eater) does: dispersing the seeds of the trees whose fruits they eat. The smallest toucan species, the lettered aracari (Pteroglossus inscriptus) is only about 11 inches (28 centimeters) tall and weighs only about 4.6 ounces (130 grams), while the largest toucan, the toco toucan (Ramphastos toco) is nearly three times as tall and six times as heavy. What all the toucan species — and there are over 40 of them — have in common is their preference for their home turf (toucans don't migrate), their habit of making nests in the hollow cavities of trees and, of course, their long, often colorful bills.

What's In a Bill?

"Toucans use their bills to do all the things that any bird would do, but perhaps the most important function is to grab food," says Thomas Schulenberg, who studies neotropical birds at the Cornell Lab of Ornithology, in an email interview. "Toucans are primarily frugivorous, so that means they're using the bill to snag fruit. Much of the fruit that they eat can be swallowed in a single gulp: The bird grabs something with the tip of the bill, then tosses it toward the back of the throat and swallows. Toucans also capture and eat small vertebrates when they find them — mostly small lizards and frogs, and the eggs and nestlings of smaller birds. Aside from feeding, toucans use the bill to preen the plumage, just like any other bird."

Of course, a bird doesn't need a bill as splendid as a toucan's to eat fruit — many other avian frugivores have substantially smaller bills. So, it must be that the bill of the toucan serves some other roles, aside from chowing down. In many toucan species, the bill and head are used in displays — communications with their own kind.

"The larger species of toucans — the genus Ramphastos, the model for the Froot Loops icon — often perch on exposed sites in the canopy and call, while throwing the head back and swinging it from side to side," says Schulenberg. "And in all species, the bill of the male is significantly longer than the bill of the female. So, presumably the size of the toucan bill owes as much or more to sexual selection as it does to any functional requirement."

Toucans bills might also be useful for shedding excess heat. A study published in the July 2009 issue of Science magazine suggested that, given the surface area of the bill (which accounts for between 30 and 50 percent of the bird's entire body), a toucan's beak receives a lot of blood, which can serve as a good tool for thermal exchange.

"There's a growing awareness now that the bill serves a similar function even in species with much smaller bills, such as sparrows!" says Schulenberg.

Since toucans like to hang out in the same place their entire lives, you don't find toucan species anywhere other than their native range (unless, of course, they were taken there through the exotic pet trade). However, toucans bear a striking resemblance to a type of bird found in subtropical Africa and Asia called a hornbill. Both are large birds with a large, long, colorful bill — superficially very similar, but they are not related to one another at all.

"The toucan and hornbill branches of the bird world diverged from each other around 50 to 55 million years ago, so they've each been going their own way for a long, long time," says Schulenberg. "Any similarities between them are the result of convergent evolution, the independent acquisition of similar traits or behaviors."

Although you'll have to go to the neotropics to see a toucan, some people keep them as pets. They are not legal in every country, or even in every U.S. state, but can be kept in some places with a special license or zoological certificate. Toucans are active and time consuming pets, expensive due to their need for a constant supply of fresh fruit, and are long-lived: A toucan in captivity lives an average of around 20 to 25 years. Also, they are wild animals that haven't had generations to get used to cohabiting with humans — a toucan whose hormones are telling him to perform a raucous mating display in your kitchen just might be part of what you have to get used to, which is much more challenging and difficult to train away than a dog that gets up too early on Saturday morning.

A toucan's bill, or beak, is made of keratin, like human hair — only it's organized in a honeycomb structure.