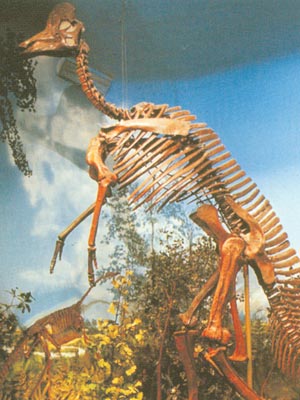 Corythosaurus, the "corinthian helmet reptile," was one of the most abundant duckbilled dinosaurs from the Late Cretaceous of western North America. Originally found and named by Barnum Brown of the American Museum of Natural History, Corythosaurus is also one of the best known of all dinosaurs. Many skeletons of this animal have been found. They ranged from small juveniles to large adults. Some skeletons were fully articulated (attached) with complete skulls, and some skeletons were disarticulated material. Others were partial "mummies" with skin impressions around the body (including impressions of a horny bill), and some specimens still had the small middle ear elements in place. Corythosaurus was a remarkable dinosaur.

It had a hollow crest on top of its head above its eyes; this is often considered the most striking aspect of this animal. Its lambeosaurine relatives Lambeosaurus, Hypacrosaurus, and Parasaurolophus also had crests. The crest, which had different shapes and sizes in males and females and developed only in mature adults, contained the nasal cavity. When Corythosaurus breathed, air entered the nostrils. It then went up into the chambers of the crest, into large side pockets, and then to a common chamber in the center of the crest. From there, air traveled down to the back of the throat and into the wind pipe to the lungs.

Returning air took the opposite course. So did sounds that the animal may have made. In fact, it looks like the crest would have made an excellent resonator, like a wind or brass musical instrument. It would have made very low sounds. Scientists think that Corythosaurus would have used these low trumpeting notes to make calls to each other or to offspring. But the young, like young alligators today, would have chirped more highly pitched sounds to their parents. Perhaps these calls would have been about food or water, or danger (a tyrannosaur, for instance) in the area.