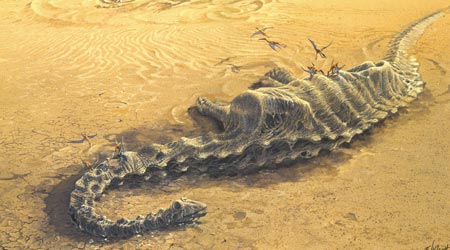 If convered by sand, these young Diplodocus specimens would have become fossils for paleontologists to study.
Canadian Museum of Nature

Diplodocus got its name because of a feature of its vertebrae. Under each tail vertebra was a piece of bone (called a chevron) running forward as well as backward, so it was like a "double beam." Diplodocus was built like a giant suspension bridge set between four massive pillars. Unlike its heavier relatives Apatosaurus and Barosaurus, which lived in the same semi-arid places, Diplodocus was lightly built, with a long flexible neck and an even longer tail.

Diplodocus is the longest dinosaur known from complete skeletons. It weighed no more than 20 tons, half of what its larger relatives weighed. This gave Diplodocus an advantage in grace and agility when wandering over the landscape. Perhaps it could more easily avoid predators.

The head of Diplodocus was small and lightly built. It was long and slender, a little like the shape of a horse's head, and about the same size. But unlike a horse, Diplodocus had no teeth in the sides of the jaws. It had long slender teeth in the front of its mouth. Also, the jaw bones were small and the jaw muscles were weak; this shows that it ate soft plants, probably the freshest new growth at the tops of conifers and tree ferns, as well as ferns on the ground.

Clues as to how Diplodocus gathered food can be found in the skeleton. The neck was long, slender, and laterally flexible, allowing Diplodocus to graze across a broad arc without moving. However, its neck was relatively inflexible in a vertical plane; Diplodocus could not raise its head much higher than its shoulders. Gastroliths or stomach stones have been found with some sauropod skeletons. The gastroliths helped grind food in the stomach and thus aided digestion.

Early drawings of Diplodocus and Apatosaurus showed these dinosaurs as slow, plodding reptiles with a sprawling posture, dragging their tails over the ground. Trackways and their skeletons show that this is not correct. Diplodocus and its relatives walked with their feet directly beneath their bodies. They also kept their tails off the ground, which balanced their bodies as they walked.

Skeletons of Diplodocus discovered by Earl Douglass in eastern Utah in the 1890s became sensational news. It was larger and more impressive than any other dinosaur in North America, except Apatosaurus. The mounted skeleton in the Carnegie Museum of Natural History in Pittsburgh was named "Dippy." It became an instant celebrity.

Diplodocus has been on display in more places in the world than any other sauropod. Early in this century, Andrew Carnegie sent casts of the complete skeleton from the Carnegie Museum to the most important museums in Europe.