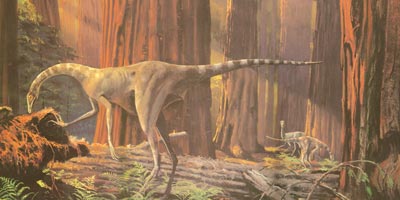 Dromiceiomimus ("emu mimic") has been found both in the Late Cretaceous Horseshoe Canyon and the Judith River Formation of Alberta. It is very similar to Struthiomimus and Ornithomimus, but had much larger eyes and longer, more slender arms. Also, some of the hip bones were positioned differently.

As in all ornithomimids, the brain of Dromiceiomimus was quite large. A large brain does not mean the animal was intelligent. For example, the ostrich and emu also have relatively large brains; they are not very intelligent, but they have very good vision. The enlarged portions of the brain probably were to coordinate body and limb actions. Dromiceiomimus was probably omnivorous; it probably ate fruits, large insects, and small lizards and mammals.

It had birdlike jaws that had no teeth. Another birdlike feature was hollow bones. With its long legs, it ran swiftly.

Could You Really Outrun a Tyrannosaurus Rex?
Giganotosaurus Was One of the Largest Carnivorous Dinosaurs That Ever Lived
Stegosaurus: Body Like a Bus, Tiny Little Brain