It takes a lot to preserve your reputation over the course of centuries, much less geologic periods. We still talk about Cleopatra and Genghis Khan, but what's more impressive is the awe with which we regard Tyrannosaurus rex, who went extinct 65 million years ago.

The dinosaur Tyrannosaurus rex, whose name translates to "tyrant lizard king, was possibly the largest land predator of all time, with a large head and powerful jaws that contained strong, peg-like teeth that could that could crunch through bone in basically the same way we munch pretzel sticks. They also had some of the largest brains of any non-avian dinosaur, tricked out with keen senses of smell and hearing, and good eyesight.

"[This discovery] tells us that tyrannosaurs got smart before they got big."
Dr. Stephen Brusatte, University of Edinburgh

The thing is that until now nobody's been able to figure out how T. rex evolved to that point. But a paper published today in the Proceedings of the National Academy of Sciences describes a newly unearthed species of tyrannosaurid dinosaur called Timurlengia euotica, recently found in Uzbekistan. The discovery of this close T. rex cousin is important because it sheds light on a dark spot in the tyrannosaur fossil record: the 20-million-year period during the middle Cretaceous, between when the oldest, human-sized tyrannosaurids were first evolving in the Jurassic and early Cretaceous, and when the blood-thirsty mega-predators reigned supreme at the end of the Cretaceous.

"Timurlengia seems to have been relatively small — about the size of a horse," says lead author Dr. Stephen Brusatte, a paleontologist and evolutionary biologist at the School of GeoSciences at the University of Edinburgh. "But its advanced brain and senses are similar to those of the of the colossal latest Cretaceous apex predators, which tells us that tyrannosaurs got smart before they got big. They evolved their signature brains and keen senses at relatively small body size, and these features later came in handy when tyrannosaurs had the opportunity to rise to the top of the food chain."

Timurlengia doesn't have the giant skull or the thick teeth of the later tyrannosaurs, according to an examination of the fossils, but the brain and ear characteristics are similar: they had tubular brains with large olfactory bulbs to heighten their sense of smell, and an inner ear with a long cochlea, which helped them hear very low-frequency sounds. This tells us that as sophisticated neurosensory features evolved early for tyrannosaurs, and T. rex and others used these qualities to become the ultimate killing machines.

Of course, the discovery of Timurlengia raises as many questions as it answers. For instance, why did tyrannosaurs become so big?

We don't know for sure, says Brusatte. "At some point around 80 to 90 million years ago," he says, "they rapidly switched from horse-sized Timurlengia-like creatures to the super-giants that we all know and love. Did they outcompete other dinosaurs like ceratosaurs and allosaurs? Or did they opportunistically take over when other giant dinosaurs that had been incumbent in the big predator role went extinct? I think the second is more likely."

Now That's Interesting
Everybody likes to make fun of T. rex’s tiny arms, but they were actually over 3 feet long, and probably could have bench pressed 400 pounds each.  If you want to see really stubby arms, check out the Carnotasaurus and its arms — those shrimpy appendages really might have been useless.

The Power of Crowds: The 'Lazer Team' Story

Experts Skeptical About Using Snot to Identify a Shooter 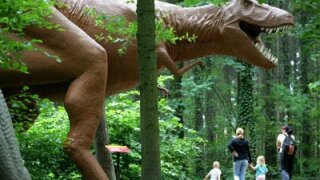 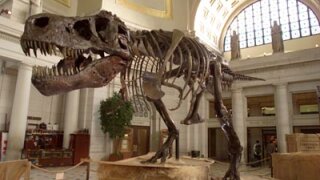 How Do Scientists Determine the Age of Dinosaur Bones?