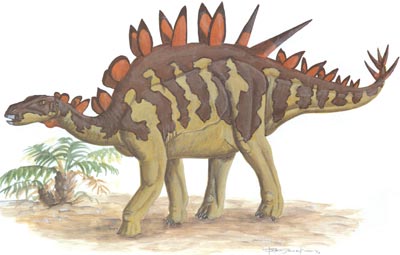 For many decades, scientists only guessed at the origin and history of the stegosaurs, which seemed to appear suddenly in the fossil record. They give little hint of where they came from or how they came to be. With the discovery in 1977 of a new Middle Jurassic dinosaur location in China, however, the mystery started to clear up.

At the Dashanpu Quarry in Zigong, China, a group of paleontology students excavated the skeleton of a 40-foot-long sauropod dinosaur that was later named Shunosaurus. By 1979, as the dig progressed, the students found many more Shunosaurus bones. They also found skeletons of several other kinds of dinosaurs that lived at the same time as Shunosaurus. Among these were the remains of 12 bodies of a new kind of stegosaur. This dinosaur was many millions of years older than any stegosaur known. In 1982, a group of Chinese paleontologists named it Huayangosaurus taibaii.

We know of only one other dinosaur that may be related to Huayangosaurus. In the late 1940s, a partial left lower jaw bone that was later named Tatisaurus oehleri was found. This small jaw, more than 200 million years old, resembled the jaw of an ankylosaur. But that was 50 million years older than any ankylosaur known in 1965, so it was tentatively classified as a hypsilophodontid. Recently, a Chinese paleontologist noted that the Tatisaurus jaw looked very much like the jaw of Huayangosaurus. He has proposed that the dinosaurs be grouped together in a separate stegosaur subfamily, the Huayangosaurinae. More research may show that this subfamily bridges the gap between the stegosaurs and the ankylosaurs.

Huayangosaurus lived in a land of lakes, rivers, and lush vegetation. By looking at its teeth, scientists can tell it was a plant-eater. Its spiky, upstanding armor plates and shoulder spines could have protected it from predators, but they could also have been for show, perhaps to attract a mate. They may also have been used to regulate its body temperature. The plates seem too thick, however, to have been very good for this. Certainly, the animal's tail spikes would have kept its enemies away. 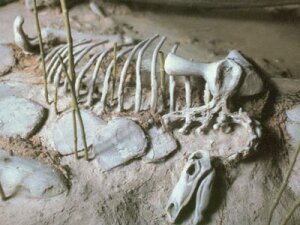