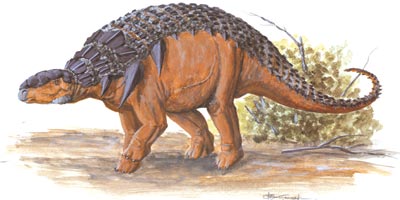 Panoplosaurus is known only from two partial skeletons, one of which preserves some of the armor the way it was in life. This skeleton shows that Panoplosaurus was unusual among nodosaurids because it did not have spikes on the sides of its neck.

It is not known how Panoplosaurus defended itself from a hungry Daspletosaurus. Perhaps the armor covering the rest of its body stopped the hungry predator from trying to attack, or perhaps Panoplosaurus used its tail to smack the predator.

Panoplosaurus appears to be closely related to Edmontonia; both lived at the same time. Both had large plates on their neck, and smaller keeled (ridged) plates on their body and tail. Their heads were similar and both had large plates fused (joined) to the surface of their skulls. For further protection, both of these dinosaurs had large oval plates covering their cheeks. Its name means "well-armored reptile." The teeth of Panoplosaurus were small for a nodosaurid, and it ate a diet of soft plants.