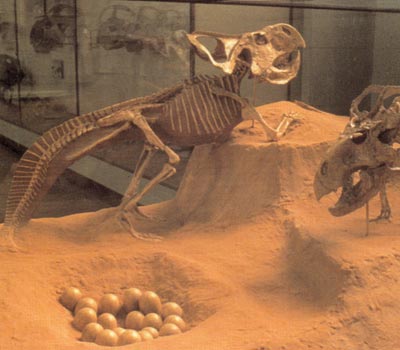 Protoceratops andrewsi was discovered in Mongolia in 1922 by an expedition from the American Museum of Natural History led by Roy Chapman Andrews. Its genus name means "first-horned face," and its species name was in honor of the expedition's leader. Protoceratops is one of the most celebrated dinosaurs of the 20th century. Workers also discovered the skeleton of a nimble toothless predator that was later named Oviraptor philoceratops, which means "egg-stealer, lover of ceratopsians." In the Gobi Desert were parents, nests, eggs, hatchlings, and egg stealers all in one amazing deposit. This was the first discovery of dinosaur eggs, and the discovery made news everywhere.

Protoceratops may be the ancestor of all horned dinosaurs. Because of this evolutionary link, and because of all the fossils found, it has been the subject of much study. Like all ceratopsians, Protoceratops was from the Late Cretaceous, but it was older than most of its relatives.

Protoceratops was a small, compact dinosaur, only six feet long as an adult and two feet tall at the hips. It weighed less than 400 pounds. Hatchlings were only a foot long, and the eggs were eight inches long and seven inches around. Although small as adults, Protoceratops had a sturdy build. The front legs were nearly as long as the back, so it could carry its heavy head and jaws. Its toes had claws that it used to dig in low vegetation for leaves and twigs. Its heavy tail balanced the animal when it walked.

It had a parrotlike beak that was rounded and toothless. The rear of the skull was expanded into great ridges of bone where the jaw muscles attached. The bony frill was small and simple in Protoceratops but became large and elaborate in some of its giant relatives. The sides of the frill were open, which lightened the skull without losing strength. The frill extended well past the neck joint. For a small dinosaur, the head and jaws were enormous. Because of this weight, the animal needed to walk on all four limbs so it could support its head when it walked.

Protoceratops had a powerful bite; it cropped low vegetation with its beak. Behind its beak, it had dozens of teeth that chopped the tough leaves and branches into smaller pieces, perhaps in a chewing motion. Food collected in its fleshy cheeks on the sides of the jaws. Along with low-growing shrubs and trees, Protoceratops may also have eaten the newly evolving angiosperms (flowering plants) that appeared in the Late Cretaceous.

Protoceratops did not have horns on its face or a shield like those found on its relative Triceratops. Protoceratops did have a slight bump on the snout below the eyes. It may have been the beginning of a horn. The bump was larger on males, which also had larger frills. Males may have used these features to attract females. With the discovery of so many skeletons, scientists concluded that Protoceratops lived in herds.

A surprise for paleontologists was the discovery that these dinosaurs lived in the desert. The eggs were laid in shallow holes in the sand. Also, the small pores and the pattern on the shells show that the eggs were adapted for desert conditions. In the 1920s, scientists thought that all dinosaurs lived in swamps and forests.