Why would there be no more fish in 40 years? 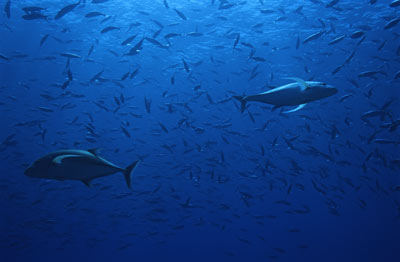 Endangered Animal Image Gallery Some researchers claim there will be no seafood left to catch by 2048, due to overfishing and trawling. See more endangered animal pictures.
Sami Sarkis/Getty Images

According to researchers, there will be no seaf­ood left to catch by 2048, except for jellyfish, which will thrive in the new, collapsed ecosystem. Luckily, they say th­at jellyfish have the same nutritional content as shrimp, which is pretty darn good.

You can't make the claim that all fish species will collapse -- "collapse" meaning the species has fallen to 10 percent of its highest known numbers -- by 2048 without a lot of people raising an eyebrow. How can that be? Our supermarkets are chock-full of cod and salmon and shrimp and tuna and every other big, slimy, underwater delicacy. Sushi restaurants are multiplying exponentially.

The authors of the study might say that's part of the problem. Overall, what they see as the looming eradication of marine life would be the result of a lack of diversity in ocean ecosystems that comes from the overfishing of particular types of fish.

To arrive at the conclusion that there will be no more fish by 2048, the scientists looked at a number of data sources, including global fishing data from the U.N. Food and Agriculture Organization, fishing data from all 64 major global marine ecosystems between 1950 and 2003, results from individual studies of marine areas by local scientists -- including a study of the San Francisco Bay and its surrounding rivers -- and data from 48 marine areas protected by conservation measures. What they found isn't pretty. In the case of the San Francisco Bay and its surrounding rivers, as reported in a San Francisco Chronicle article on November 2, scientists looked at population data going back a thousand years and discovered that "... more than 90 percent of of the original water-dwelling species in those waters have lost at least half of their populations." In addition, 30 percent of those species had collapsed at one point but recently came back into safer numbers. It seems that with loss of even a few species, the rest of the marine environment degrades more quickly. Diversity seems to play a key role in keeping marine ecosystems alive.

The research points to a number of practices as contributing to the vulnerable state of marine ecosystems worldwide. Overfishing and destructive fishing practices like trawling, where fishers drag a weighted net along the sea bed and just grab up everything down there, whether they can sell it or not, deplete some species to point of collapse. When certain species no longer play their role in the ecosystem, the imbalance makes the ecosystem more susceptible to harm, for example in the form of an overgrowth of toxic life like algae blooms that deplete the oxygen content in the water. This depletion of oxygen content leaves other species of fish less likely to thrive. And then, of course, pollution and climate change play a role in the lack of marine diversity, as well.

Sockeye salmon may be off the menu within our lifetime.
Photo courtesy Washington Department of Fish and Wildlife

Critics of the study point out several flaws that call into question the 40-year estimate for the fall of fishing. First, they say that none of the data in the study reflects a direct cause-and-effect relationship. It's all based on drawing correlations between trends recorded in separate collections of data. They also note that U.N. fishing data is considered by­ many experts to be unreliable because some countries use questionable methods to report their fishing numbers. Also, other organizations including the NOAA have seen opposing trends in marine populations. According to at least one NOAA scientist, diversity in several marine populations in the United States is on the rise. Finally, skeptics point out that the study's findings don't take into account the protective measures already in place to conserve ocean biodiversity and prevent species collapse. While the study's interpretation of data from protected environments shows that conservation methods are working, the study appears to set that aside in predicting a 2048 absence of fish.

Whether the short track to fishlessness is accurate or not, the study's finding that nearly 30 percent of fish species are already collapsed due to overfishing is at the very least a warning signal.

To prevent the end of marine life as we know it, the study suggests that world act quickly -- in a couple of decades, they say, the damage will be too far gone to undo. Experts promote enacting global protections and increasing current conservation efforts while ocean life is still diverse enough for the ecosystems to recover.

For Naked Mole Rats, Age Doesn't Increase the Risk of Death
How many bugs do I eat every year?
Sphynx Cats Are Surprisingly Sweet and Cuddly