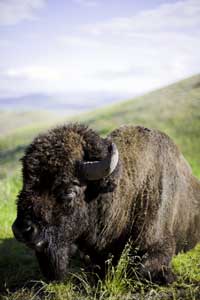 Bison were nearly hunted to extinction by the end of the 19th century. See more pictures of mammals.
Bob Stefko/Getty Images

Before the West was won, tens of millions of bison dominated the American landscape. Their pre-colonial range spanned almost the entire United States, with a concentration in the Great Plains, extending from Canada to northern Mexico. Bison -- commonly known as buffalo -- congregated in thundering herds, grazing on thousands of acres of virgin grasslands. Vegetation on the Plains was well suited to the bison diet because the grasses' roots are packed with vitamins and minerals to allow for swift regrowth [source: Savage]. During that time, Native American tribes across the Great Plains hunted bison, using the enormous bovines for food, clothing and shelter materials, tools and more [source: Allen].

Two bison species are native to North America: plains bison and wood bison. Weighing nearly a ton, bison are the largest land mammals in the United States [source: Sample]. Despite their size, bison can sprint at speeds up to 35 mph (56 kph) [source: National Park Service]. Although they only feed on grass, bison are a keystone species in the Plains, meaning their influence in the environment affects the well-being of many other species.

But in the 1700s, the horse's arrival in the West sparked the bison's demise in North America. Riding horses and the invention of the .50-caliber rifle transformed buffalo hunting from low casualty affairs to all-out massacres [source: Cloud]. At the beginning of the 19th century, the market for buffalo hide boomed in the United States and Canada as well as Europe. The combination of efficient hunting methods and a growing demand set the stage for the period dating from roughly 1820 to 1880, known as "the Great Slaughter."

Hunters slaughtered bison across the Great Plains by the thousands, slicing the population from 30 million to just over 1,000 by 1890 [source: American Bison Society]. Because they became so scarce and bison extinction seemed imminent, Theodore Roosevelt, William Hornaday and other men formed the American Bison Society in 1905 to ensure the species' survival. By that point, the Bronx Zoo and Yellowstone National Park had also established bison preserves, and in 1908, the federal government created the National Bison Range in Montana. Ironically, these conservation efforts wouldn't become the driving force behind the bison population comeback. 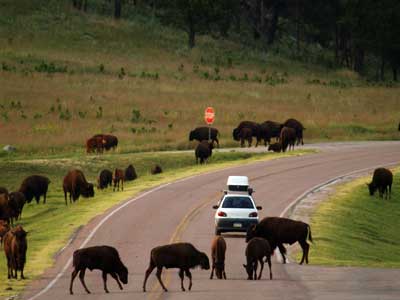 Lack of available land has been a major obstacle for bison conservation.
David McNew/Getty Images

Although their numbers shrank to a perilously small figure at the end of the 19th century due to overhunting, bison weren't federally classified as an endangered species in the United States. Instead, private and public conservation efforts gradually nudged their population upward, with the greatest increase occurring in the last 40 years.

Nevertheless, the U.S. wild bison population today is less than one percent of what it was in pre-colonial times, hovering at around 20,000 animals. North America is home to only five free-ranging plains bison herds and eight wood bison herds [source: World Conservation Union Bison Specialist Group]. But it isn't for lack of trying.

Public bison preservation efforts began in 1907 when 15 were relocated to New York's Bronx Zoo. Yellowstone National Park had only a few dozen bison roaming on its land at that time. Offspring from that initial group would later be relocated to protected areas in Oklahoma, Montana, South Dakota and Nebraska [source: Wildlife Conservation Society]. Native American tribes have also contributed to repopulation efforts in recent years. In 1990, tribes around South Dakota met to form the InterTribal Bison Cooperative, and today the group is comprised of 57 member tribes that oversee 15,000 heads of bison.

A handful of factors have inhibited more robust bison population growth. Perhaps most influential is the sheer lack of space. Bison are prairie grazers, and much of their native land has been developed. Because the existing bison herds have remained relatively small, that has also diminished the diversity of the bison gene pool. Once that happens, inbreeding can increase the rate of health problems in a herd.

Speaking of health problems, a virus called brucellosis plagues wild bison, particularly those in Yellowstone National Park. Brucellosis causes female bison to abort their babies and reduces fertility and milk production. In addition, people can catch it from eating tainted meat and develop prolonged flulike symptoms [source: USDA]. As a result of the virus and the animal's naturally unpredictable behavior, more than 3,700 bison that have wandered outside of Yellowstone in the past 20 years have been shot by state and federal wildlife officials [source: Martin]. Quarantine periods have delayed wild bison from being relocated to other areas in the West in order to expand the population, although the USDA plans to do so, possibly in Alaska, during winter 2008 [source: The Economist].

Ironically, commercial breeding has had a greater impact boosting bison numbers, and more than 95 percent of bison are privately owned. People began breeding herds of bison in captivity as early as 1870 [source: Lott and Greene]. Then, in the 1970s, ranchers started buying more bison to build up a niche meat market [source: Cloud]. From a financial standpoint, investing in bison is a thrifty move for ranchers since the grass grazers don't require costly feed and their meat is low in fat and cholesterol. According to the USDA, the bison market has gradually expanded in the United States, from less than 18,000 commercial bison slaughtered for sale in 2000 to around 50,000 in 2007. Thanks to the growing demand, there are around 400,000 commercial bison living in the United States.

Granted, commercial bison are raised in order to be killed later, so it doesn't exactly constitute a resurgence in pure conservationist terms. Nevertheless, it has raised the profile of the bison and triggered a newfound appreciation for the animal -- even if it is an appreciation for how it tastes.

Although bison are commonly referred to as "buffalo," biologically speaking, they're birds of a different feather. Buffalo (Cape buffalo and water buffalo) are native only to Africa and Asia, whereas bison are native to North America. Both are members of the Bovidae family.

How did the bald eagle get delisted as an endangered species?
Coconut Crabs: Crustaceans on Steroids
Is a Dead Stingray's Sting Still Lethal?