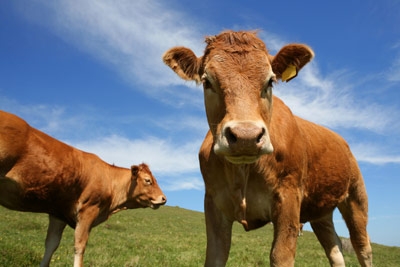 The large amounts of methane produced by cows are now a cause of concern and the subject of much scientific research. See more pictures of mammals.
© Photographer: Joe Gough | Agency: Dreamstime.com

Agriculture is responsible for an estimated 14 percent of the world's greenhouse gases. A significant portion of these emissions come from methane, which, in terms of its contribution to global warming, is 23 times more powerful than carbon dioxide. The U.S. Food and Agriculture Organization says that agricultural methane output could increase by 60 percent by 2030 [Source: Times Online]. The world's 1.5 billion cows and billions of other grazing animals emit dozens of polluting gases, including lots of methane. Two-thirds of all ammonia comes from cows.

Cows emit a massive amount of methane through belching, with a lesser amount through flatulence. Statistics vary regarding how much methane the average dairy cow expels. Some experts say 100 liters to 200 liters a day (or about 26 gallons to about 53 gallons), while others say it's up to 500 liters (about 132 gallons) a day. In any case, that's a lot of methane, an amount comparable to the pollution produced by a car in a day.

To understand why cows produce methane, it's important to know a bit more about how they work. Cows, goats, sheep and several other animals belong to a class of animals called ruminants. Ruminants have four stomachs and digest their food in their stomachs instead of in their intestines, as humans do. Ruminants eat food, regurgitate it as cud and eat it again. The stomachs are filled with bacteria that aid in digestion, but also produce methane.

With millions of ruminants in Britain, including 10 million cows, a strong push is underway to curb methane emissions there. Cows contribute 3 percent of Britain's overall greenhouse gas emissions and 25 to 30 percent of its methane. In New Zealand, where cattle and sheep farming are major industries, 34 percent of greenhouse gases come from livestock. A three-year study, begun in April 2007 by Welsh scientists, is examining if adding garlic to cow feed can reduce their methane production. The study is ongoing, but early results indicate that garlic cuts cow flatulence in half by attacking methane-producing microbes living in cows' stomachs [Source: BBC News]. The researchers are also looking to see if the addition of garlic affects the quality of the meat or milk produced and even if the animals get bad breath.

Another study at the University of Wales, Aberystwyth, is tracking quantities of methane and nitrogen produced by sheep, which provide a good comparison model for cows because they have similar digestive systems, but are less unruly. The sheep in the study are living in plastic tunnels where their methan­e production is monitored across a variety of diets.

Many other efforts are underway to reduce ruminant methane production, such as attempting to breed cows that live longer and have better digestive systems. At the University of Hohenheim in Germany, scientists created a pill to trap gas in a cow's rumen -- its first stomach -- and convert the methane into glucose. However, the pill requires a strict diet and structured feeding times, something that may not lend itself well to grazing.

In 2003, the government of New Zealand proposed a flatulence tax, which was not adopted because of public protest.

Other efforts look at the grazing lands being used by livestock farmers, which will be discussed in the next section.

So we know that ruminants are producing enormous quantities of methane, but why? Humans produce gases daily, sometimes to their embarrassment, but nowhere near the extent of these animals. On the next page, we'll learn more about the source of the methane problem and some of the controversy behind it.

Why do cows and other ruminants produce methane? 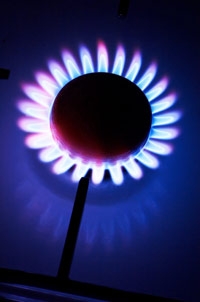 With the development of large-scale agriculture in the mid-20th century, farming became a big business for some companies. Farms became consolidated into large enterprises with many thousands of animals across large acreages.

Initially, grazing areas were filled with a variety of grasses and flowers that grew naturally, offering a diverse diet for cows and other ruminants. However, in order to improve the efficiency of feeding livestock, many of these pastures became reseeded with perennial ryegrass. With the aid of artificial fertilizers, perennial ryegrass grows quickly and in huge quantities. The downside is that it lacks the nutritious content of other grasses and prevents more nutritious plants from growing. One commentator called it the "fast food" of grasses [Source: Guardian Unlimited].

This simple diet allows many cows to be fed, but it inhibits digestion. A perennial ryegrass diet also results in a significant number of weak and infertile cows, which have to be killed at a young age. This is where the methane comes in. The difficult-to-digest grass ferments in the cows' stomachs, where it interacts with microbes and produces gas. The exact details of the process are still being studied, and more information may allow scientists to reduce cows' methane output.

A study at the University of Bristol compared three types of naturally grown pastures to ryegrass pasture grown with chemical fertilizers. Lambs were fed on each type of pasture. The meat from lambs fed on natural pastures had less saturated fat, more omega-3 fatty acids, more vitamin E and higher levels of conjugated linoleic acid (CLA), a "good fat" that is believed to fight cancer. The meat from these lambs was considered very high quality and scored well in flavor tests.

Because of concerns about ruminant diets, many researchers are investigating ways to alter what livestock eat and to mix the best of old cow pastures -- diverse, naturally growing, nutrient rich grasses and plants -- with the best of the new -- fast-growing and resistant to invasive species. One possibility is to increase the ability of beneficial, nutrient-rich plants and flowers to grow alongside the fast-growing grasses commonly used in pastures. Another branch of research focuses on plants that are high in tannins, which are believed to lower methane levels in ruminants and to boost milk production -- although excessively high level of tannins are harmful to a ruminant's growth.

A study by researchers in New Zealand recommends the use of plants like birdsfoot trefoil that are high in alpha-linoleic acid, which boosts CLA levels. Planting legumes and genetically engineered plants to trap airborne nitrogen will also improve nitrogen levels in the soil, which is important for rich soil and healthy plants.

Some dairy farmers use processing systems to harvest methane from cow manure. The energy is used to power the farm while excess is often sold back to the local electrical grid.
Image courtesy Alden Pellett/Associated Press

Believers in naturally grown, mixed-species pastures say that the use of them will reduce greenhouse gases, improve animal health and meat quality and reduce the use of artificial fertilizers. Efforts like methane-reducing pills or the addition of garlic may just be stopgap measures that fail to address some of the core problems of livestock, namely ground and air pollution, cutting down of forests, the production of weak animals that later have to be culled and the use of artificial fertilizers and steroids.

Another possibility exists in trapping the methane gas and using it as energy or selling it back to the electrical grid. Some farmers already extract methane from livestock waste, but that does not solve the bigger problem of belched methane. Harnessing that methane would mean trapping it in the air, perhaps by housing cattle indoors or outfitting them with special muzzles that may inhibit eating.

For more information about ruminants, methane, global warming and related topics, check out the links on the next page.