When the last quagga mare died at the Amsterdam Zoo on Aug. 12, 1883, no one realized she was the last of her kind.

The quagga, a subspecies of the plains zebra (Equus quagga), had a distinctly different striping pattern with solid-colored hindquarters. It also had a background color that was a darker brown than a typical zebra. The quagga once roamed South Africa in large herds before being hunted into extinction.

Now, thanks to the Quagga Project at a private nature reserve about 55 miles (90 kilometers) northeast of Cape Town, South Africa, the quagga — or at least a zebra that very much looks like a quagga — is coming back to life.

In the mid-1980s, after studying DNA evidence taken from the preserved coats of quaggas, scientists hypothesized the quagga's genetics might still be present in the DNA of plains zebras that roam near the quagga's geographic origin in South Africa. They were right.

So knowing that quagga and zebra are genetically identical but express different traits was essential. (Think of how much physical variety there is between different dog breeds, but they're all the same species.) From this plains zebra herd, 19 animals that retained hints of quagga traits — namely, fewer stripes on their hindquarters and a darker background color across the rear half of the body — were collected for a breeding program.

During the next 30 years, the South African zebras were selectively bred to emphasize the quagga's color traits and only the offspring that had quagga traits were kept in the breeding program. With each generation, there was a decrease in the hindquarter stripes and an increase in the intensity of the brown background color. This brought the quagga one step closer to reality, with one important exception.

An engraving of photograph by Frederick York of London, circa 1870, pictures a quagga mare in the London Zoo
Universal History Archive/Getty Images

Although the Quagga Project is producing animals that increasingly look like quaggas, there may be some nuanced behavioral or other traits that can't be recovered from the extinct species. To that end, this resurrected sub-species is often called the rau-quagga after one of the project's original creators, Reinhold Rau.

“We can get the appearance, at least, of the quagga back by a simple selective breeding program,” says Eric Harley, a geneticist and professor at Cape Town University who is the leader of the Quagga Project.

As of January 2016, there are 100 animals in the breeding program, with six offspring that carry the traits to be called a rau-quagga. The goal, says Harley, is to have 50 rau-quagga in a self-sustaining herd.

Now That's Tragic
In 1886, the Cape Town government enacted legislation to protect the quagga from extinction — three years after the last existing quagga died in an Amsterdam zoo. Oops.

Marijuana Use in Colorado Sending More Visitors to ER Than Residents 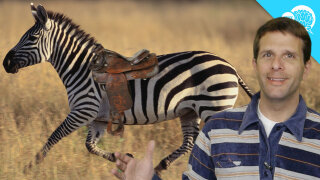