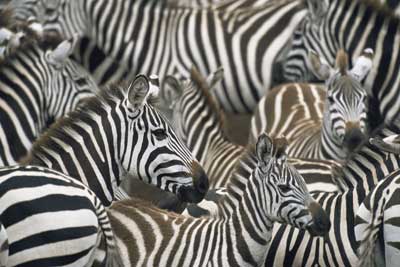 Before the solid-coated and dappled thoroughbreds that usually come to mind when we hear the word "horse," there was the zebra. One of the oldest members of the horse family, the African zebra seems far more exotic than common horses and donkeys. However, it closely resembles the earliest equine ancestors [source: Groves].

Zoologists have yet to unravel all of the genetic mysteries that lie behind the zebra's signature striped suit. The alternating color pattern works well with its native environment, deflecting up to 70 percent of the heat that hits its body [source: The International Museum of the Horse]. The arrangement of the stripes adds another intriguing dimension to the animal's biology since each zebra has a completely unique design. In particular, the stripes on its shoulders, or withers, contain the most individualized markings [source: The International Museum of the Horse].

If you wear a zebra-print outfit in a crowd, it nearly guarantees that someone will easily spot you. In the jungle, however, a zebra's stripes actually work as a camouflage to deter its main predators: lions and hyenas. Since the animals herd together, experts believe that the mass of stripes can confuse the predators by acting as an optical illusion that blends their figures together. Consequently, a group of 10 zebras may look like a giant striped blob that a lion wouldn't want to take on solo. For more detailed information about this natural disguise, read "How do a zebra's stripes act as camouflage?"

By and large, these ungulates -- or hoofed animals -- prefer to pal around together rather than alone, migrating as far as 300 miles (482 kilometers) to graze [source: Holland]. Even before mating, clusters of bachelor zebras will eat together. Then, stallions will lead a number of female zebras, called a harem. Their unique stripes promote this social behavior since they can tell each other apart.

Even if you aren't an equine specialist, you can easily spot a zebra from its telltale black-and-white color scheme. But which is it: black on white or white on black? Find out on the next page.