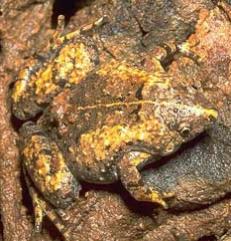 This toad is hardly distinguishable from its surroundings.

­In nature, every advantage increases an animal's chances of survival, and therefore its chances of reproducing. This simple fact has caused animal species to evolve a number of special adaptations that help them find food and keep them from becom­ing food. One of the most widespread and varied adaptations is natural camouflage, an animal's ability to hide itself from predator and prey.

­In this article, we'll see how animals blend in with their environment so that others might overlook them. We'll look at a few sophisticated hiders who can change their camouflage in accordance with a change in their surroundings. In addition to these expert hiders, we'll look at some animals who don't hide at all, but throw predators off by disguising themselves as something dangerous or uninteresting.­ 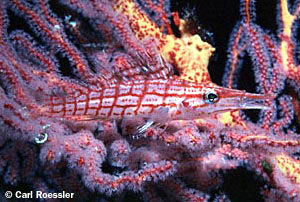 A tartan hawkfish, photographed off the coast of Papua New Guinea - The fish's striking coloration allows it to blend in with these bright gorgonian fans.
Photo courtesy Carl Roessler

Most animal species in the world have developed some sort of natural camouflage that helps them find food and avoid attack. The specific nature of this camouflage varies considerably from species to species.

There are several factors that determine what sort of camouflage a species develops:

For most animals, "blending in" is the most effective approach. You can see this sort of camouflage everywhere. Deer, squirrels, hedgehogs and many other animals have brownish, "earth tone" colors that match the brown of the trees and soil at the forest ground level. Sharks, dolphins and many other sea creatures have a grayish-blue coloring, which helps them blend in with the soft light underwater.

A cryptic frog - This species has developed a coloring, texture and form that are similar to the leaves found in its environment.
Photo courtesy David Parks

There are two ways in which animals produce different colors.

Both physical and chemical coloration is determined genetically; they are passed on from parent to offspring. A species develops camouflage coloration gradually, through the process of natural selection. In the wild, an individual animal that more closely matches its surroundings is more likely to be overlooked by predators, and so lives longer. Consequently, the animal that matches its surroundings is more likely to produce offspring than an animal that does not match. The camouflager's offspring will likely inherit the same coloration, and they will also live long enough to pass it on. In this way, the species as a whole develops ideal coloration for survival in their environment.

The means of coloration depends on an animal's physiology. In most mammals, the camouflage coloration is in the fur, since this is the outermost layer of the body. In reptiles, amphibians and fish, it is in the scales; in birds it is in the feathers; and in insects it is part of the exoskeleton. The actual structure of the outer covering may also evolve to create better camouflage. In squirrels, for example, the fur is fairly rough and uneven, so it resembles the texture of tree bark. Many insects have a shell that replicates the smooth texture of leaves.

Camouflaging coloration is very common in nature -- you see it to some degree in the majority of species. But it is much less common for an animal to be able to change its coloration to match a changing environment. In the next section, we'll look at a few of the animals that use this sort of adaptive camouflage.

As the seasons change, the Arctic fox changes the color of its coat. In the spring and summer, it has a dark coat, to match the brown dirt in its environment. In the fall and winter, it turns white, to match the surrounding snow.
Reproduced with permission of the Minister of Public Works & Government Services Canada, 2001

One of the biggest shifts in an animal's surroundings occurs with the changing of the seasons. In the spring and summer, a mammal's habitat might be full of greens and browns, while in the fall and winter, everything can be covered with snow. While brown coloration is perfect for a summer wooded environment, it makes an animal an easy target against a white background. Many birds and mammals deal with this by producing different colors of fur or feathers depending on the time of year. In most cases, either changing amounts of daylight or shifts in temperature trigger a hormonal reaction in the animal that causes it to produce different biochromes.

Feathers and fur in animals are like human hair and fingernails -- they are actually dead tissue. They are attached to the animal, but since they are not alive, the animal can do nothing to alter their composition. Consequently, a bird or mammal has to produce a whole new coat of fur or feathers in order to change color. In many reptiles, amphibians and fish, on the other hand, coloration is determined by biochromes in living cells. Biochromes may be in cells at the skin's surface or in cells at deeper levels. These deeper-level cells are called chromatophores.

Chamaeleo pardalis, a chameleon species found in the forests of Madagascar. Chameleons can produce a wide range of colors and patterns on their skin, but they do this primarily to express mood, not to blend in with different environments.
Photo courtesy David Parks

Some animals, such as various cuttlefish species, can manipulate their chromatophores to change their overall skin color. These animals have a collection of chromatophores, each of which contains a single pigment. An individual chromatophore is surrounded by a circular muscle that can constrict and expand. When the cuttlefish constricts the muscle, all the pigment is squeezed to the top of the chromatophore. At the top, the cell is flattened out into a wide disc. When the muscle relaxes, the cell returns to its natural shape of a relatively small blob. This blob is much harder to see than the wide disc of the constricted cell. By constricting all the chromatophores with a certain pigment and relaxing all the ones with other pigments, the animal can change the overall color of its body.

Cuttlefish with this ability can generate a wide range of colors and many interesting patterns. By perceiving the color of a backdrop and constricting the right combination of chromatophores, the animal can blend in with all sorts of surroundings. Cuttlefish may also use this ability to communicate with each other. The most famous color-changer, the chameleon, alters its skin color using a similar mechanism, but not usually for camouflaging purposes. Chameleons tend to change their skin color when their mood changes, not when they move into different surroundings.

Some animal species actually change which pigments are in their skin. Nudibranches (a small sea creature) change their coloration by altering their diet. When a nudibranch feeds from a particular sort of coral, its body deposits the pigments from that coral in the skin and outer extensions of the intestines. The pigments show through, and the animal becomes the same color as the coral. Since the coral is not only the creature's food, but also its habitat, the coloration is perfect camouflage. When the creature moves on to a differently colored piece of coral, its body color changes with the new food source. Similarly, some parasite species, such as the fluke, will take on the color of their host, which is also their home.

Many fish species gradually produce different pigments without changing their diet. This works something like seasonal molting in mammals and birds. When the fish changes environments, it receives visual cues of a new surrounding model. Based on this stimulus, it begins to release hormones that change how its body produces pigments. Over time, the fish's coloring changes to match the new surroundings.

The Element of Animal Disguise 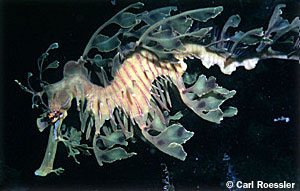 A leafy sea dragon, photographed off the coast of Australia. Leafy sea dragons have developed flowing appendages and vivid coloration that lets them blend in with the undersea plant life in their environment.
Photo courtesy Carl Roessler

­ ­In addition to background-matching coloration, many animals have distinctive designs on their bodies that serve to conceal them . These designs, which might be spots, stripes or a group of patches, can help the animal in a couple of ways. First, they may match the pattern of "the model," the background of the animal's surroundings. For example, animals that inhabit areas with tall, vertical grass often have long, vertical stripes. Second, they may serve as visual disruptions. Usually, the patterns are positioned "out-of-line" with the body's contours. That is, the pattern seems to be a separate design superimposed on top of the animal. This makes it hard for the predator to get a clear sense of where the animal begins and ends -- the pattern on the body seems to run off in every direction.

This disruptive coloration is particularly effective when animals in a species are grouped together. To a lion, a herd of zebras doesn't look like a whole bunch of individual animals, but more like a big, striped mass. The vertical stripes all seem to run together, making it hard for a lion to stalk and attack one specific zebra. The stripes may also help a single zebra hide in areas of tall grass. Since lions are colorblind, it doesn't matter that the zebra and surrounding environment are completely different colors.

Walking sticks have adapted to resemble their surroundings. Most of the time, their predators pass them by as they would a real twig.
Photo courtesy Scott Camazine

Many fish species are similarly camouflaged. Their vertical stripes may be brightly colored, which makes them stand out to predators, but when they swim in large schools, their stripes all meld together. This confusing spectacle gives predators the impression of one big, swimming blob.

Generally, this sort of camouflage doesn't hide an animal's presence, it merely misrepresents it. A related camouflage tactic is for an animal to take on the appearance of some other object. One of the most famous examples of this sort of impressionist is the walking stick, an insect that looks like an ordinary twig. A predator can easily distinguish a walking stick from its surroundings, but the predator thinks its only a stick, and so ignores it. You can also see this sort of camouflage in some katydid species, which have evolved so that they look just like tree leaves.

Other animals use a more aggressive sort of mimicry. Several moth species have developed striking designs on their wings that resemble the eyes of a larger animal. The back of the hawk moth caterpillar actually looks like a snake head, a frightening visage for most predators the moth would come across. A simpler variation on this adaptation is simple color mimicry. In many ecosystems, smaller poisonous animals develop a bright coloration -- predators learn to steer clear of these colors, lest they get a mouthful of venom. Over time, other, non-poisonous species may develop the same coloration, cashing in on the nasty reputation of the poisonous species.

Mimicry is a different approach than ordinary camouflage, but it works toward the same end. By developing a certain appearance, an animal species makes itself a harder target for predators and a sneakier hunter for prey. In different areas around the world, you'll see all sorts of variations and combinations on the basic elements of camouflage. As animal species evolve, they become more and more in tune with their environment. Often, these sorts of adaptations are more effective survival tools than an animal's more aggressive weapons of defense (teeth, claws, beaks). After all, being entirely overlooked by a predator is preferable to having to put up a fight.

For more information about animal camouflage and related topics, check out the links on the next page.