by Mark Mancini May 1, 2018
This illustration of a prehistoric mastodon shows the size of the animals Founding Father Thomas Jefferson believed might still be roaming the plains in the early 1800s. Bettmann/Getty Images

For the Sage of Monticello, science was a patriotic pursuit. When he wasn't drafting declarations or making land deals with Napoleon, Thomas Jefferson kept himself busy by studying the natural world. Paleontology was among his favorite subjects and during the American revolution, he used mastodon bones to defend the honor of his emerging country. Here's the story of how that came to pass.

Giants in the Land of Bluegrass

During the last ice age, Boone County in northern Kentucky was a swampy wetland teeming with mega-mammals. On the ground lay exposed deposits of salt — or "salt licks" — that attracted herbivores in need of sodium supplements. Predators, such as humans, grew wise to this and ambushed careless plant-eaters at the licks.

The swamps were not safe loitering places. Every so often, creatures who came to eat the salt (or each other) got stuck in the mud and died. Radiometric dating tells us the earliest victims perished there just over 18,000 years ago. Time turned the region into a graveyard, a mass burial site loaded with fossilized bones. Some were left behind by species that still exist today, like caribou. Others represent mastodons, ground sloths and other extinct giants.

The first Europeans to learn of Boone County's amazing bonebed were the members of a French military expedition led by the baron Charles le Moyne. When his party visited this area in 1739, native guides presented them with some fossilized tusks, a few teeth and one man-sized femur. Quickly, the Frenchmen realized that these bones must've belonged to an elephant-like creature. Thanks to the colossal fossils, the area became known as "Big Bone Lick." It still goes by that name today.

Le Moyne sent his specimens to King Louis XV in Paris. We now know the bones in question belonged to the American mastodon, Mammut americanum. (Note that mastodons are not to be confused with mammoths, a separate group of elephantine herbivores.)

Traders and land surveyors collected additional fossils at Big Bone Lick in the 1750s and 1760s. Scholars were especially intrigued by the huge mastodon molars coming out of the site. The biggest weighed more than 6 pounds (2.7 kilograms) and all of them had tall, cone-shaped cusps. So what did mastodons eat? The modern consensus is that they fed on leaves, water plants and twigs. Yet some 18th-century naturalists envisioned a different diet. When Benjamin Franklin received a box of mastodon fossils, he wrote that "The tusks agree with those of the African and Asiatic elephant, but the grinders differ, being full knobs like the grinders of a carnivorous animal." In other words, he thought the mastodon was a colossal, flesh-eating monster. Imagine that!

Of course, Franklin was not the only Founding Father with an interest in mastodons — or Big Bone Lick. As Virginia's governor, Jefferson became obsessed with the fossils of northern Kentucky. The mastodon bones helped him refute a widely-circulated argument about New World inferiority. In 1766, the French naturalist George Louis Leclerc, comte de Buffon published his "Theory of American Degeneracy."

We contacted environmental historian Mark Barrow, Jr. He tells us via email, "Buffon was a materialist who believed that a limited number of life forms originally appeared on the earth through spontaneous generation and that as [they] migrated to different environments, they responded to the conditions they encountered there by changing form."

Buffon wondered why American creatures tended to look small and puny next to their Old World counterparts. (Next to an Indian tiger, the Mexican jaguar is a tabby.) His theory blamed the climate. Though he'd never set foot in the Western Hemisphere, he assumed that it was a cold, damp place.

"Buffon and some of his followers believed that the New World environmental conditions were such that they led the animals who lived there to degenerate," Barrow says. In the process, those creatures supposedly became "weaker, smaller, and less able to reproduce." And Buffon didn't stop there. To Jefferson's dismay, the naturalist claimed the same thing happened to human beings who'd moved to the Americas.

"Americans found this theory quite threatening, and Jefferson set out to disprove it," Barrow notes. Indeed, the Virginian spent a lot of time and energy trying to set the record straight. He aimed to show the world that, despite Buffon's claims, America had some animal giants of its own. To this end, Jefferson sent Buffon the massive corpse of an New World moose. In his 1780 book "Notes on the State of Virginia," he bolstered his case by writing about the giant mastodons of Big Bone Lick (and other American bonebeds). With the evidence mounting against it, Buffon's theory fell apart.

Jefferson's love of mastodons was ridiculed by his opponents in the cutthroat presidential race of 1800. Still, he carried the day and won the (newly completed) White House.

While in office, his biggest achievement was arguably the Louisiana Purchase of 1803. Before Meriwether Lewis and William Clark set out to survey the newly-bought land, Jefferson told them to keep an eye out for live mastodons. Back then, extinction seemed like a far-fetched idea to many naturalists — including the president. "Since mastodons and mammoths could not possibly be extinct, Jefferson and others thought, they must still be roaming around in the unexplored parts of the world," Barrow says.

In lieu of live specimens, Lewis sent the president a couple of new mastodon fossils from Big Bone Lick. At Jefferson's behest, Clark returned to the Kentucky fossil bed with a ten-man team in 1807. This trip is considered the first organized vertebrate paleontology excursion in U.S. history. The fossils Clark's party dug up were proudly displayed at the Jefferson White House. Later on, some of the bones went to museums in Paris, Philadelphia and elsewhere.

Others returned to Kentucky. In 1960, the Big Bone Lick fossil site was incorporated into a new state park. A museum is now on the premises, along with life-sized statues of prehistoric critters. At the entrance, visitors are greeted by a sign that reads "Big Bone Lick Historic Site: Birthplace of American Vertebrate Paleontology."

Now That's Interesting
The American mastodon was named Michigan's official state fossil in 2002 because its remains are common in the Lower Peninsula. West Virginia's state fossil is the ground sloth Megalonyx jeffersoni, which was named after a certain U.S. president. Lin-Manuel Miranda should've included that fact in his musical, "Hamilton" ... 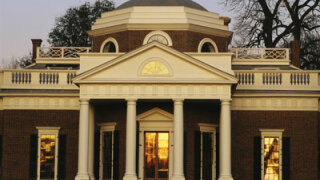 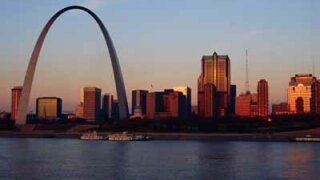 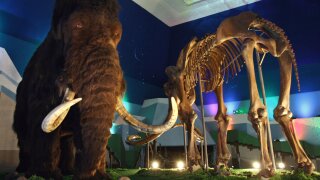