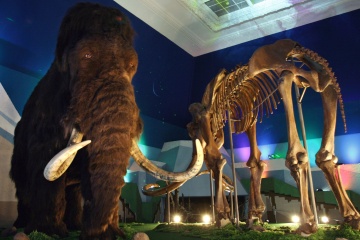 Yes, they're both huge and furry -- but there are some significant differences between mammoths and mastodons.
Sovfoto/UIG via Getty Images

Check out illustrations of woolly, prehistoric elephantine animals sometime. Can you tell at first glance whether you're looking at mammoths or mastodons? Would you like to know how to quickly hone in on their differences? Read on to increase your knowledge of these similar but distinct species.

The mammoth and the mastodon are both part of the family proboscidean, which includes elephants and basically means "animals with trunks." The discovery of both mammoth and mastodon bones in different parts of the United States in the late 1700s sparked the collective imagination of the young nation. At first, the bones were thought to be the skeletons of giants who had roamed the Earth long before man. Once enough of the bones were disinterred to see that they came from animals, it was assumed that they were from the same extinct creature. This idea turned the world upside down — the prevailing belief was that God would not let one of his creatures die out. Although the bones were similar to an elephant's, they were clearly of a species that no longer lived on Earth.

Scientists and laypeople alike scrutinized the bones, which revealed distinct differences. Mammoths lived primarily in the American West and Siberia, where they fed on grass. Their teeth were relatively flat with ridged grooves. Mastodon teeth had cone-shaped cusps to aid in chewing leaves, twigs and bark.French anatomist Georges Cuvier thought the cones on the teeth looked like breasts and ultimately gave the mastodons their name. Masto means breast in Greek and odon means teeth [source: Conniff].

The teeth aren't the only differences, though. While the skeletons of these creatures have been found in the U.S., nearly intact mammoths have been found buried in the permafrost in Siberia. Woolly mammoths that lived in Siberia and the cold climates of North America during the Ice Age developed layers of fat beneath their skin and an undercoat of thick fur covered by a coat of longer fur to help keep them warm. Mammoths also adapted to live on islands, such as the Channel Islands in California. These pygmy mammoths were smaller — about the size of a large horse — and more agile than their larger cousins, the American mammoth and the woolly mammoth.

Mastodons were shorter and stockier than mammoths and not nearly as furry as woolly mammoths. They also had longer, hairier tails, smaller ears and shorter tusks than mammoths. And now you know the difference, should it pop up on trivia night or during an episode of "Jeopardy."

How did passenger pigeons become extinct?
Prehistoric Turtle Had a Toothless Beak But No Shell
Who Owns the Rights to a Dinosaur Skeleton?