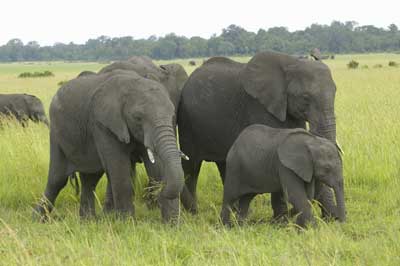 Women and elephants never forget an injury. Or so it goes according to H.H. Munro's brief narrative, "Reginald on Besetting Sins." We'll set aside the questionable implications of the first half of that assertion for now. But regarding the elephants, the British author was onto something.

Nearly a century later, extensive observations have confirmed that elephants indeed remember injuries and hold grudges against their abusers. For example, one study of African elephants found that the animals react negatively to the sight and scent of clothing worn by members of a nearby Maasai tribe of people [source: BBC News]. Why the sour grapes? Maasai men spear elephants as a customary display of their masculinity.

Anecdotal evidence also suggests that elephants remember trainers or keepers who mistreated them even after years of separation [source: National Geographic]. Similarly, scientists have linked elephant raids on villages in Uganda to a form of post-traumatic stress disorder [source: Shaikh]. The experts believe that the elephants lashed out because the growing human population was taking over elephant territory, forcibly separating some elephants from their close-knit family units [source: Shaikh].

Elephants are far more thoughtful mammals than their popular circus entertainer personas imply. In the wild, they follow formalized family structures with older females, or matriarchs, at the top. Daughter elephants always stick close with their mothers, forming families. Male offspring leave the family at around 14 years of age, or whenever they reach sexual maturity, described as being in musth. From there, males join groups of other male elephants, which they'll periodically leave for mating purposes. During droughts, multiple elephant families consisting of the females and their calves may congregate to form bond groups and share resources.

With all of this coming and going, elephants have many forms of communication to keep up with each other. One method for spatially locating other elephants is through the bundles of nerve sensors in their feet called Pacinian corpuscles [source: Braden]. The corpuscles translate seismic vibrations coming from the ground into a nerve impulse that sends a message to the brain about the source and direction of the vibrations. Even their toenails contain nerves that discern where sounds come from [source: Friend].

But what's going on in those noggins that makes elephants famous for their memory? Next, we'll dissect the elephant brain to see whether or not it's just peanuts up there.