by Mark Mancini
Next
The Smithsonian created a full-scale, scientifically accurate replica of Titanoboa, the biggest snake to have ever roamed Earth, as part of a traveling exhibit. This display was part of the Museum of Natural History's exhibition in Washington, D.C., in 2013. James DiLoreto, Smithsonian

The extinction of the dinosaurs (birds notwithstanding) 65.5 million years ago didn't happen in a vacuum. When the last T. rex died, other reptilian lineages — from the winged pterosaurs to huge, aquatic relatives of today's monitor lizards — simultaneously kicked the bucket. Indeed, this was one of the greatest mass extinction events of all time. It also marked the dawn of our current geologic era: the Cenozoic, or the "Age of Mammals."

But don't let the nickname fool you. Although mammals diversified like crazy in the Cenozoic, Earth wasn't done with giant reptiles yet. Scientists break the Cenozoic down into subdivisions called "epochs." And the first of these — the Paleocene — saw the rise of Titanoboa cerrejonensis, a colossal snake that would make modern pythons and anacondas look like spaghetti noodles.

Cerrejón is a vast coal mine in northern Colombia. Reuters reported that it produced 37.1 million short tons (33.7 million metric tons) of the stuff in the year 2014 alone. Yet coal isn't the only precious commodity available there.

Working alongside the miners, paleontologists have unearthed thousands of Cenozoic fossils in Cerrejón. Approximately 58 million years old, these fossils date back to the early Paleocene and represent exotic plants, river fish, crocodile-like predators and big old turtles with 5.7 foot (or 1.72-meter) shells — to name a few.

These fossils tell us the area was tropical and swampy, much like the Amazon River Delta we have today. Wide-leaved jungle trees would've flanked ancient rivers choked with water plants. Out in the steaming wilderness, Titanoboa lurked.

Fossils from 28 of these giant snakes have been recovered at Cerrejón. Unfortunately, we've yet to locate a complete skeleton. Instead, the scientific community has had to make do with an assortment of ribs and vertebrae — plus some skull material.

Yet even these finds speak volumes. By comparing the fossils to the bones of living snakes, we can get a pretty good idea of what Titanoboa looked like. For example, subtle clues in the vertebrae indicate that the animal was a boid.

It makes sense geographically: Boids are a family of snakes usually found in the Americas. Being nonvenomous, they tend to kill by constriction. Of all the boids alive today, Titanoboa's closest relative might be the red-tailed boa, a denizen of Central and South America that can grow up to 13.2 feet (or 4 meters) long. Movie buffs who've seen "A Clockwork Orange" will probably recognize said reptile.

Titanoboa also invites comparisons to a much larger boid: The green anaconda. Capable of weighing 440 pounds (200 kilograms), this South American serpent is the heaviest modern snake. And it's plenty long, too: The biggest reliably measured specimen was 27.2 feet (8.3 meters) in length.

Over in Asia, the unrelated reticulated python — or "retic" — can exceed this figure, stretching up to 28 feet (8.5 meters) long in some cases. But the retic has a sleeker frame; experts don't think it can rival the anaconda's maximum weight.

Regardless, neither serpent could hold a candle to Titanoboa. Scientists estimate that the Paleocene predator stretched 42 to 47 feet (12.8 to 14.3 meters) in total length. Theoretically, it might've tipped the scales at 1.25 tons (1.13 metric tons). Longer than Tyrannosaurus rex, Titanoboa cerrejonensis is the biggest snake known to science, living or extinct.

The Smithsonian's Titanoboa was unveiled in New York’s Grand Central Station in 2012 and showed the massive snake wolfing down a crocodylian.
James DiLoreto, Smithsonian

So here's a question: What would a snake so massive eat?

Green anacondas famously eat capybaras, pig-sized rodents with semiaquatic habits. Smaller cousins of the American alligator are also on their menu. To that end, a life-sized Titanoboa sculpture that the Smithsonian created went on display as part of its Titanoboa: Monster Snake exhibit. It was unveiled in New York's Grand Central Station in 2012 and showed the mighty snake wolfing down a crocodylian.

The following year, a description of Titanoboa's head structure was published. Anatomically, the reptile's teeth and jaws resemble those of modern snakes who specialize in eating fish. If Titanoboa followed suit, it was the only boid on record with a fish-centric diet.

Like the green anaconda, Titanoboa probably spent a great deal of time in bodies of water. There, it could easily lug its massive body weight around — and beat the jungle's sweltering heat.

Titanoboa's discovery was first announced in a paper published in the journal Nature. The lead author was paleontologist Jason Head of the University of Cambridge. Head (who did not respond to our request for comment) cited this animal as evidence of the Paleocene's hot climate.

Climate scientists think the world was far warmer in the early Paleocene than it is today. Reptiles may have reaped the benefits; for the most part, snakes, lizards, turtles and crocodiles can't generate body heat like human beings do. Instead, they maintain their vital functions by absorbing warmth from their environments.

Back in '09, Head described Titanoboa as a giant thermometer. He and his colleagues used its ample size to make an educated guess about the environment it lived in.

By their calculations, the very existence of such a huge, cold-blooded reptile indicates that Colombia must have had a mean annual temperature of 86 to 93 degrees Fahrenheit (30 to 34 degrees Celsius) when the snake reigned 58 million years ago.

But perhaps dead boids aren't the most reliable gauges.

Kale Sniderman is an Earth scientist at the University of Melbourne in Australia who studies prehistoric climates and ecosystems. He notes that the Pleistocene — an epoch that ended about 10,000 years ago and included Earth's most recent ice age — also had its share of big reptiles.

"Many now-extinct reptile species existed in the Pleistocene that were larger than their living relatives," Sniderman says via email. "Those extinct species," he adds, lived at a time when "climates pretty much everywhere were at least 1 to 3 degrees Celsius [or 1.8 to 5.4 degrees Fahrenheit] cooler than today."

Consider Varanus priscus, a Komodo dragon relative that patrolled Australia during the last ice age. At roughly 18 feet (5.5 meters) long, it was far bigger than the lizards we have today. Speaking of saurians, the biggest gecko of all time died out in its native New Zealand just a few hundred years ago.

"Neither occurred in warm climates, by global standards," Sniderman says.

It could be that giant reptiles don't need an oppressively hot planet to survive and thrive after all. Competition from mammals might be a bigger check on their success.

In any case, Titanoboa is long gone. So is Varanus priscus and that great New Zealand gecko. Yet their cousins remain, enriching our world with flashy scales, forked tongues and adhesive toe pads. This may be an "Age of Mammals," but there are some wonderful reptiles still among us.

Fossilized traces of legumes, bananas and coconuts have also appeared at the Cerrejón. Muy bien! 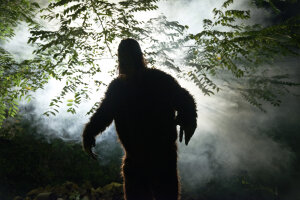