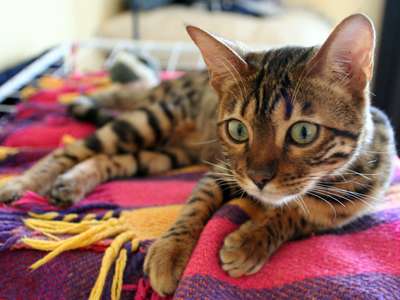 Some people are cat people. They take pictures of their cats, tell stories about their cats, and feed their cats designer food. For a cat lover, even the most unremarkable cat is special, but the following cats have been singled out for extra-noteworthy achievements or distinctions.

1. Cat Most in Need of a Babysitter: Bluebell

Bluebell, a persian cat from South Africa, gave birth to 14 kittens in one litter. She holds the record for having the most kittens at once, with all of her offspring surviving -- rare for a litter so large.

was blown up into a big oak tree. In 2001, Big Boy's owner claimed the cat never left the tree. The feline eats, sleeps, and eliminates in the tree and climbs from branch to branch for exercise.

In 1952, a seemingly ordinary tabby cat gave new meaning to the term "maternal instinct." Texas-born Dusty set the record for birthing more kittens than any other cat in history. Dusty had more than 420 kittens before her last litter at age 18.

More than 37 years old at the time of her death, Cream Puff, another Texan, is recognized as the oldest cat to have ever lived. In human years, she was about 165 years old when she died.

The Birman cat breed originally came from Burma (now Myanmar) where these longhairs were bred as companions for priests. A Birman cat can be identified by its white "gloves." All Birmans have four white paws, which give them that oh-so-aristocratic look.

In Scotland, a tortoiseshell tabby named Towser was reported to have slain 28,899 mice throughout her 21 years -- an average of about four mice per day. Her bloodlust finally satiated, Towser died in 1987. (The mice of Scotland are rumored to celebrate her passing as a national holiday.)

7. Most Itty-Bitty Kitty in the Whole World: Tinker Toy

Though this Blue Point Himalayan died in 1997, this cat still holds the record for being the smallest cat ever. Tinker Toy was just 2.75 inches tall and 7.5 inches long and weighed about one pound eight ounces.

According to the Guinness Book of World Records, the heaviest cat in recorded history was an Australian kitty named Himmy that reportedly weighed more than 46 pounds in 1986. If the data is accurate, Himmy's waistline measured about 33 inches. Guinness has removed this category from their record roster, so as not to encourage people to overfeed their animals.

Fossils from the Eocene period show that cats roamed the earth more than 50 million years ago. Sure, they looked a little different, but these remains show that today's domestic cats have a family tree that goes way, way back.

The Battle of the Big Cats: Maine Coon vs. Norwegian Forest
5 Things You Can Train Your Cat to Do (Really)
Should cats be kept exclusively indoors?