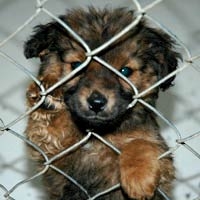 What's in a Name

In the past, "strays" were rounded up by "dog catchers" and taken to the "dog pound." Today the language used to describe the process is far gentler. "Animal control officers" find "homeless" animals and take them to "shelters," where they are cared for until they can be "adopted." These new expressions reflect society's changing attitudes about animal welfare.

In an ideal situation, an animal will only stay in a shelter until its owner returns or it is adopted. Sadly, shelters don't have enough room to indefinitely house all of the animals they receive. More than half of all cats and dogs that enter shelters are put to sleep because they are too sick or old, or they don't find homes.

Augusta DeLisi rescued her first dogs when she was 12 years old. Soon after, she started Augies Doggies Rescue with the goal of saving as many dogs as possible. Now in high school, she has big dreams for her organization's future.

The term “animal shelter” typically brings to mind long rows of metal-barred cages, the pungent smell of urine, and cacophonous barking. But for pets lucky enough to get lost in the San Francisco area, accommodations are available at an animal shelter so luxurious that it would make most humans jealous. In fact, Maddie’s Pet Adoption Center looks more like a five-star hotel than an animal shelter. At the $7 million facility (funded by donations), cats have their own private condos, where they can lounge on cushy sofas, scratch at plush posts, and watch DVDs of frolicking birds and squirrels. In the dog wing, pooches share elegant, furnished Victorian or Spanish-style apartments complete with skylights, human-like beds, and as many toys as they can chew. All of the animals get out of their apartments for regular “play dates,” and none of the residents are ever euthanized.

Keeping Your Pet Out of a Shelter

Many families give up a pet because they are moving, having a new baby, or because the animal has a behavioral problem. But others lose their animals by accident—because they didn’t take the proper safeguards to keep them at home.

Here are a few tips to avoid losing your pet to a shelter: