Why are black cats considered unlucky? 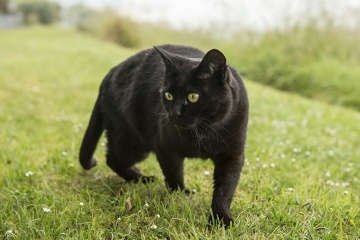 Black cats have a bad rap, but truthfully they're just as cute (and innocent) as other kitties.
AnnWorthy/Thinkstock

Everyone knows that when a black cat crosses your path bad luck is sure to follow, but have you ever wondered how black cats got their dark reputation? Is it simply due to the color of their coat, or something more sinister?

Thousands of years ago, cats of all colors enjoyed the good life in ancient Egypt, where killing a cat came with a swift death sentence. A few millennia later, Christianity spread throughout Europe by overthrowing local pagan customs and traditions. This meant vilifying pagan symbols such as the Roman goddess Diana, as well as the cat -- which became a pagan symbol thanks to its link to earlier gods and goddesses [source: Waddell].

In 1233 AD, Pope Gregory IX put the final nail in the black cat coffin when he declared black cats to be an incarnation of the devil himself. Eager to prove their devotion, Christians began to round up black cats and burn them alive at village festivals to punish them for their devilish ways [source: Waddell]. It got so bad that by the 14th century, cats were nearly extinct in some parts of Europe.

Over the next few centuries, the idea that black cats were in league with the devil naturally led to a link between black cats and witches. Black cats, according to superstition, were believed to be witches in disguise. Others claimed that a black cat could eventually become a witch himself after serving as a witch's familiar for seven years [source: Webster]. By the time of the famous witch trials of the 16th and 17th centuries, simply owning a black cat was enough to get a "witch" condemned to death [source: Associated Press].

Ironically enough, the black cat superstition lingers to this day, and has proven to bring nothing but bad luck for the black cats themselves. In a 2013 study at Colorado State University, researchers found that it takes four to six days longer for black shelter cats to be adopted than cats of any other color. This spells bad news for black cats, as around 70 percent of shelter cats are eventually euthanized. While researchers can't say for sure why black cats are less attractive to potential pet owners, the myths surrounding black cats and bad luck could potentially play a role [source: Colorado State University].