by Laurie L. Dove Nov 14, 2016
What's up with that puppy paw smell? Some say it's reminiscent of Fritos, while others say it's fresh popcorn. Paul Park/Getty Images

You probably don't go around smelling your dog's feet all the time, but if you did, the odor might remind you of something ... crunchy. As it turns out, there are many dogs of all breeds and sizes whose feet smell like corn chips. Or popcorn, some say. Or nacho-flavored tortilla chips.

Although the smell and its interpretations vary, most people who sniff their pet's odiferous feet are convinced their nostrils are picking up some kind of crunchy snack varietal — think the corn chip brand Fritos, in particular. But why? It has everything to do with microorganisms.

The average human body comprises 30 trillion cells, and is topped by skin covered by 40 trillion bacteria, but this ratio may be even greater for dogs. In particular, the nooks and crannies of dog paws pick up actinobacteria from soil, where the bacteria lives and multiplies.

Most of a dog's apocrine glands, or sweat glands, are concentrated in the pads on their feet. These pads are surrounded by fur and create damp and warm crevices that become a terrific breeding ground for all kinds of bacterial growth. With all this reproduction comes a number of accompanying smells, most of which are related to bacterial byproducts.

So, which bacteria cause your dog's feet to smell like a snack bar? Yeast, for one. Yeast loves to thrive in warm, wet environments. And so does the bacteria called Pseudomonas, which emits an odor that many people interpret as popcorn. The real culprit in that corn chip smell, though, is the Proteus bacteria, which smells like slightly sweet corn tortillas — and seems to intensify after dogs sleep, possibly because the heat generated by a sleeping dog encourages bacterial activity.

Even if you're not a fan of corn chip paws — some pet owners call the odor "Frito feet" — your health may benefit from exposure to doggy bacteria. Studies have shown that pregnant women who own dogs have babies with a more diverse microbiome, and that children who grow up around pets aren't as prone to suffer from allergies. Most researchers agree that exposure to a greater number of microbes enhances immune system functions. No word, yet, on whether simply inhaling those microbes and their byproducts by huffing puppy paws does the trick. Can't hurt, though, right?

Now That's Cool
Dogs have impressive smell-detecting skills. A study conducted in the Netherlands found that beagles trained to sit or lie down when they smelled a certain bacterium were accurate 265 out of 270 times.

Calexit? After the Election, Some Californians Dream of Secession 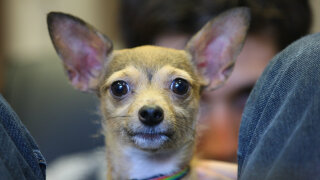