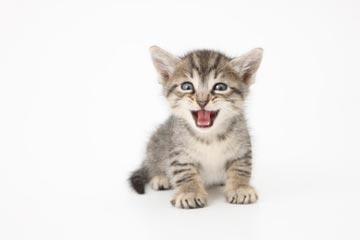 Happy? Ornery? It may be hard to tell what's going on, but how could animals make such ridiculous faces without some emotion at the helm? See more pictures of cats.
Vincenzo Lombardo/Photographer's Choice/Getty Images

Arriving home to be greeted by a yipping dog bouncing off the walls and a purring cat cuddled up in bed can bring a strong sense that you're the star of the show and your pets are decidedly happy to see you. But are they really expressing happiness? And is that a freshly chewed-up shoe in the corner? What's up with that? A case of canine criticism?

Animal emotion is a complicated arena, but it seems the scales are slowly tipping toward the opinion that animals do have emotions, although some skeptics remain. The debate surrounding the scope of emotions animals possess derives from two main complications: the potential for anthropomorphism (humans projecting their own traits onto animals) and the inherent difficulties of studying emotions in nonhuman species.

Believers, however, typically opine that animals are capable of a range of emotions, such as happiness, sadness, empathy, grief, curiosity, anger, anxiety and fear. So a naughty dog that goes on the carpet and gnaws up everything is probably not actively trying to punish its absent person for being gone so long. But it might be feeling lonely and anxious, and not know how to behave when left on its own for so much time.

Emotions might have evolved out of social necessity, helping animals adapt to different situations. Animals raised by themselves don't learn all the social niceties involved in getting along with others. They'll often interact poorly when forced to socialize later in life.

Plus, many proponents for animal emotions say that if you compare the portions of the brain that get fired up when people experience emotions to those nestled in creature craniums, you get some corresponding hotspots. The amygdala is one such example, and it's pretty ancient evolutionarily speaking. So since our brains are hardwired the same way as an animal's, the theory is that it makes intuitive sense for similar stuff to be going on up there [sources: Bekoff, Tangley].

But if animals do, in fact, feel emotions, to what extent do they experience them, and is there a sliding scale in terms of which animals undergo which emotions? If even tiny insects like mosquitoes were able to grieve, your next camping trip could turn into a serious guilt trip. Elephants, on the other hand, along with sea lions, geese, bears, monkeys and moose all appear to be hit hard by the death of a loved one. On a more cheerful note, dolphins, chimpanzees, elk and rats are among the multitude of mammals and smattering of birds that engage in play, appearing blissfully happy when they do.

On the next page, satisfy your curiosity on topics ranging from human vs. animal smarts, or whether your nutty pets are actually helping to keep you a happy camper.

How can salamanders regrow body parts?
10 Virus Carriers
Why do geese mate for life?