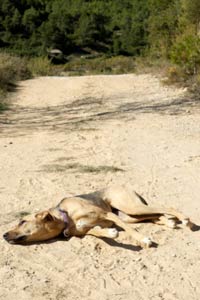 What's going on in there, pup? See more pictures of dogs.
©iStockphoto.com/Thinkstock

It's a pretty funny sight when a sleeping dog starts thrashing around, legs flailing, perhaps in a futile attempt to gain ground on a taunting squirrel that somehow manages to stay just out of reach. A few muted barks of frustration might escape the dog's muzzle as it slows its pretend pace and starts wagging its tail. Maybe your canine friend imagines you giving it a bone as a reward for its superior (if ultimately unsuccessful) squirrel-tracking efforts.

We'll probably never know for certain whether dogs are truly dreaming during action-packed slumber sessions like the one described above -- dogs aren't exactly able to describe their experiences during dream analysis sessions. However, we can make some educated guesses based on the brainwave patterns observed in sleeping dogs.

The period of sleep when the brain is most active and primed for some serious dreaming is REM sleep. While not all organisms slip into rounds of REM, most mammals are among those that do. Since dogs are mammals, and it's been found that their brainwaves are very similar to humans' when we're experiencing REM sleep, it stands to reason they spend their REM time much as we do, dreaming of the ordinary and extraordinary events that fill their doggie days.

Some of the behaviors dogs often exhibit while sleeping include tail wagging, facial twitching and leg movements, with a variety of barks, growls, whimpers, whines and yelps thrown in for good measure. What exactly is prompting them to put on this goofy show will likely remain a mystery -- unless someone figures out how to teach a dog to talk.

Learn more about dogs, dreams and the depths of the human psyche on the next page.