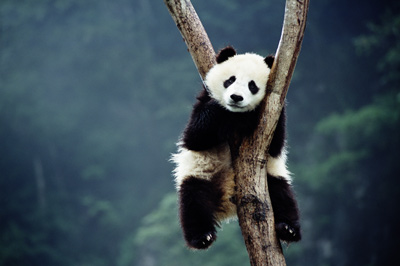 Bears are notorious for their hibernation habits. As most of us learned early in school, bears, as well as several other animal species, undergo this long-term, sleep-like phase to escape from the bitter cold during winter months. And can we blame them? After all, winter can't be fun when there's little food and bitterly uncomfortable temperatures. Many sun-loving humans would much rather sleep through the icy, snow-shoveling season and wake to a warm spring. Would you be surprised to learn that, curiously, the giant panda, also called the "panda bear," abstains from this ancient, protective ritual?

If you've read How Hibernation Works, you know that the process can take on a variety of forms. But pandas don't take part in any kind of hibernation, even under the loosest definitions of the term. It's not that they don't like sleep -- far from it. Giant pandas sleep for about eight to 12 hours a day. And it's not that their bodies can take the cold -- they actually have relatively little body fat with which to insulate themselves from low temperatures [source: Stone]. But, rather, when the weather gets tough, the pandas get going. Instead of burrowing away at the first sign of uncomfortable temperatures, like many bears do, giant pandas simply find a more comfortable place to relax and eat bamboo.

Living near mountains conveniently allows giant pandas to find refuge in more comfortable temperatures. In the summer, giant pandas like to seek out cooler temperatures at high elevations. Though typically they live at around 9,000 feet (2,743.2 m) above sea level, during a hot summer they will typically climb up as high as bamboo still grows -- to elevations of 11,500 feet (3,505 m) [source: Stone]. And, when cold seasons ensue, they'll head back down to warmer elevations, sometimes about 4,000 feet (1,219 m), if necessary.

Bear or not, there's more at work behind a giant panda's preference to migrate rather than snooze away the winter. It turns out that the giant panda's peculiar diet excludes the possibility of hibernation. Read on to find out why.

What's in a name?

Pandas are so linked with the bamboo diet that they were actually named for it. "Panda" most likely is derived from a Nepalese word that means "bamboo-eater." But the Chinese call the Panda "Xiongmao" or "Giant Cat Bear."