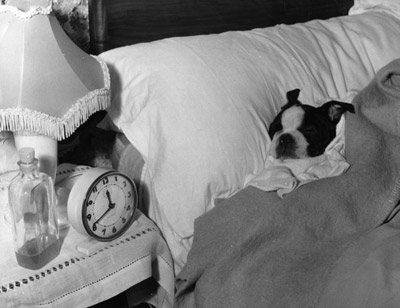 Does a dog understand the passing of time in the same way a human does? See more pictures of dogs.
Fox Photos/Hulton Archive/Getty Images

Most dogs are never late for a meal -- they know exactly where to be at the same time every day. They also know when to expect their owner home and, like clockwork, place themselves patiently at the door for that arrival. When you witness this behavior, you assume dogs have a sophisticated understanding of time. But what is time really like for a dog?

They say a human year is equivalent to about seven dog years. But what does this common theory tell us about a dog's perception of time? Actually, very little. The idea of "dog years" comes from the life expectancy of dogs compared to humans. So it wouldn't be correct to apply this idea to the concept of time perception.

To understand how dogs perceive time, we first need to understand how humans perceive time. Arguably, each person experiences the passing of time in different ways at different times. Albert Einstein once explained the principle of relativity by saying, "When a man sits with a pretty girl for an hour, it seems like a minute. But let him sit on a hot stove for a minute -- and it's longer than any hour. That's relativity" [source: Shapiro].

Even though the experience of time is relative for every individual, all humans think about time in similar ways. For instance, our memories are inextricably tied to how we understand the passing of time. Our ability to remember events in a particular order plays a large part in our perception of time. We're also able to predict things. Though we don't all claim to be psychic, each of us counts on certain events in the future -- even as simple as assuming that the sun will come up tomorrow. These abilities have important implications -- for instance, memory and prediction allow us to have a sense of continuity, personal history and self-awareness.

Do dogs and other animals have these same abilities? If you climbed inside a dog's mind, would you be presented with the memory of eating a raw hide bone earlier this morning? Read the next page to find out what it would feel like to be a dog.

Can animals learn and plan without a concept of time? 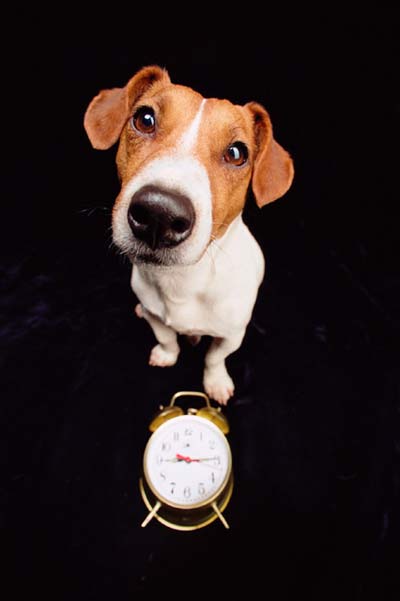 Experiments show that animals may not have any concept of the past or future.
David Waldorf/Taxi/Getty Images

Human beings have two important abilities to help us understand time: We are able to remember a sequence of events and we are able to anticipate future needs or events. Studies show that animals may have these abilities -- but to a lesser extent.

Scientists have tested animals' working memories (short-term memory) and reference memories (long-term) to see how well the animals recall sequences of events. In working memory tests, pigeons and primates must remember a sequence well enough to peck or pick it in the right order again to get a reward [sources: Parker, Devine]. The animals did fairly well at these tasks, but their memory faded fast. Roberts thinks they were probably learning going from weakest memory to strongest memory, rather than actually "learning" or "remembering" a sequence.

Other researchers found that pigeons and monkeys performed well at reference memory tests in which they needed to remember a sequence after a delay between learning and testing [sources: Straub, D'Amato]. But, it took extensive training for the animals to learn these sequences, suggesting to Roberts that the ability did not come naturally to them. From these tests, it seems that animals would perceive time differently from humans, who have a relatively reliable and sophisticated memory of sequence of events.

In addition, animals don't seem to anticipate future needs and rewards very well, suggesting to researchers that they don't have a concept of the future. For instance, when given the choice, pigeons and rats chose a smaller immediate reward over a larger future reward [source: Rachlin, Tobin]. In one test, researchers presented primates with a choice between one banana and two bananas. Understandably, they chose two bananas consistently. However, as the supply of the two choices got larger, they started showing less of a preference -- they weren't hungry enough at that moment to eat 10 bananas, so they chose five bananas half the time [source: Silberberg]. Roberts concludes from these experiments that these animals sought to satisfy immediate hunger needs, and didn't plan for future hunger. This is very unlike humans, who usually use reason and forethought to anticipate future needs, from deciding to pack a lunch for work to investing in a 401(k) retirement plan.

So what about squirrels and other animals that hoard food for the impending winter months? That behavior seems to imply the animals anticipate future needs. Actually, maybe not. Studies have found that animals don't stop hoarding even when their supplies inexplicably disappear. This could mean the animals don't understand why they hoard, what it means for their future or even what future is. They simply do it out of instinct [source: Roberts] Humans, on the other hand, understand their preparations and quickly change strategies when plans go awry.

If animals are "stuck in time," as Roberts suggests, this could mean understanding time is uniquely and fundamentally human. It's your choice whether to relish that fact or try to learn something from the canine, carefree outlook of "living in the moment."

To read more about dogs and their amazing abilities, explore the links that follow.