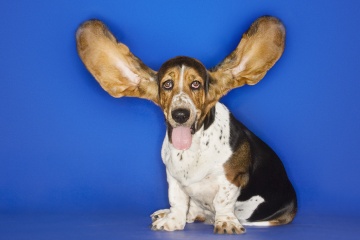 Do animals really understand what we're saying to them or are they royally duping us?
Mike Watson Images/Thinkstock

Humans have a special relationship with house pets, and a full 62 percent claim that their pets understand the words that they speak [source: USA Today]. While there's no way to know exactly how much Fido gets what you're saying, scientists have proven that some dogs, apes and even dolphins can understand spoken language.

In one study, a border collie named Rico demonstrated that he knew the name of more than 200 objects, and could fetch these items on command [source: Science]. A similar study conducted on another border collie named Chaser went even further; not only could Chaser distinguish the names of at least 1,022 objects, he could also infer the names of new objects [source: Hecht]. For example, if asked to fetch Mr. Monkey -- a toy he had never seen before -- he could locate Mr. Monkey through the process of elimination when the monkey was placed near toys he was familiar with.

Perhaps even more exciting, Chaser was able to repeat this process of locating unfamiliar toys by name a full month later, after only being exposed to the new items once before. He was also able to understand verbs and objects used in different contexts; for example, Chaser demonstrated that he could put his nose to a ball, fetch, touch or take the ball depending on the command given.

Just so you don't think that border collies have an edge, a Yorkshire terrier demonstrated his understanding of more than 120 words in a separate study [source: Hecht].

But what about other animals who don't have such a close relationship with humans? Consider the case of Kanzi, a bonobo ape. Through years of work with his trainer, Kanzi was able to demonstrate his understanding of more than 3,000 English words [source: Raffaele]. A researcher would speak the words from a separate room to avoid giving any contextual clues, and Kanzi would listen through headphones and point to the symbol represented by the word on his special keyboard. The ape was also able to respond appropriately to commands, such as, "Put the soap in the water."

Perhaps even more interesting is the case of a pair of bottlenose dolphins, who demonstrated that they were able to understand full sentences in a 1984 study. Trainers used computer-generated sounds and hand signals to communicate with the dolphins, who were able to follow instructions ranging from two to five words in length. The dolphins could also locate objects placed in the tank with them a full 30 seconds after commands were given, or report to their trainers when commands given were impossible to execute [source:Herman et al].

As for the mighty housecat -- studies indicate that cats can easily distinguish their owner's voice from other voices calling their name [source: Saito and Shinozuka]. While they send signals demonstrating they know exactly what's going on, they also make it clear they don't care all that much and really aren't listening to exactly what you're saying. Seems only fitting behavior for the independent cat.