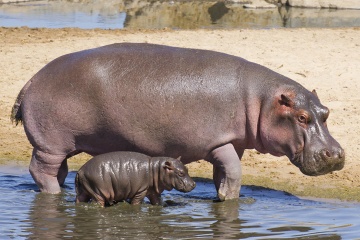 Hippos are magical creatures, but the notion that they produce pink milk might be a bit more complicated (and implausible) than previously suggested.
StuPorts/Thinkstock

The pink hippo milk rumor has been spreading across the Web for some time, but it really gained footing in 2013, when National Geographic posted about the hippo's rose-colored milk on both its Facebook and its Twitter pages in 2013.

Like all mammals, hippos produce white or off-white milk for their young. Despite this fact, it's easy to see where some of the color confusion comes from. Hippos have no actual sweat glands, but they do have mucus glands, which release an oily secretion frequently referred to as "blood sweat" [source: Ritchie].

Despite its name, this secretion is neither blood nor sweat; instead, it's a blend of hipposudoric acid and norhipposudoric acid. Combined, these two acids play an important role in the hippo's health. They not only serve as a natural form of sunscreen and moisturizer for the animal's sensitive skin, but also offer tremendous antibiotic properties to protect hippos from harmful bacteria when they're in the water [source: Mason]. That means hippos can live in some pretty toxic spots with minimal risk of infection.

Now here's where it gets weird; this special secretion comes out colorless like human sweat, but turns to a bright orange-red in the sun so that it looks like blood. A few hours later, it loses its blood-like luster and shifts into a dirty brown color [source: Hahimoto et al.].

During the period that the hippo's secretions are at their orange-red peak, it's possible that some could mix with the milk, giving it a pinkish hue. While it's possible, it's also pretty unlikely, as baby hippos are very efficient eaters. They grip mom's nipple between the tongue and the roof of the mouth, forming such a tight bond that they can even nurse underwater if they wish.

Reports of actual pink milk are limited not only by the low odds that these two fluids will mingle, but also thanks to the difficulty of getting a close look at the hippo's feeding process. Female hippos are most likely to attack when they are pregnant or taking care of their young, and few are brave enough to tangle with a mad 3,000-pound (1,361-kilogram) momma just to get a glimpse of her milk [source: Mason].

Despite a lack of evidence to support the pink milk theory, this rumor continues to spread -- tens of thousands of people have liked this fun "fact" on National Geographic's Facebook page. While countless commenters have expressed exasperation that such an esteemed source has helped to perpetuate this myth, truth-seekers can take comfort in the fact that neither the site's official hippopotamus page nor their hippopotamus page for kids makes any mention of bright pink milk.

Lonesome George Lived to Be 100 Years Old. Genome Sequencing Is Figuring Out How
Is It Illegal to Drive With a Dog in Your Lap?
Do feral cats spread disease?