On a sweltering day, when most people are cooling off at the pool or lying motionless under a high-powered fan, Dr. Brady Barr found himself decked out in a 196-pound (89-kilogram) armored suit smeared with mud and dung. In the name of scientific discovery, the scientist was on a mission to collect a wild hippo's sweat before it dried.

You're probably wondering why anyone in their right mind would risk their life by approaching one of the most aggressive and dangerous animals in all of Africa. Considering that hippos cause more deaths than any other animal on the continent, it's a reasonable question [source: Harlow].

But this isn't just any run-of-the-mill sweat we're talking about. This mucuslike secretion -- which initially led people to believe that the animal sweat blood because of its deep red color -- not only helps to control the body temperature of these 5,000- to 8,000-pound (2,300- to 3,600-kilogram) animals, it also acts as a potent sunscreen and antibiotic [source: Hughes, Saikawa].

It turns out that fair-skinned humans aren't the only ones who need to worry about SPF when they venture outside. The two species of hippo -- the common hippopotamus found in central and southern Africa, and the rare pygmy hippopotamus, a smaller species found in West Africa, weighing around 440 to 605 pounds (200 to 247 kilograms) -- structure their days around the harsh glare of the African sun [source: African Wildlife Federation].

The semiaquatic land mammals spend up to 16 hours a day submerged in rivers or lakes to stay cool, venturing out to graze only after nightfall [source: Hughes]. They nibble on their main food of short grasses until dawn, when they return to their refreshing sanctuaries.

While the water prevents the lumbering beasts from getting overheated, it doesn't offer much in the way of skin protection, which is where the blood-red sweat comes in and hippo sunscreen is created. Though it's not technically sweat since it's produced by glands underneath the skin rather than in it, the gelatinous, oily secretions act much the same way but with a few extra perks thrown in. 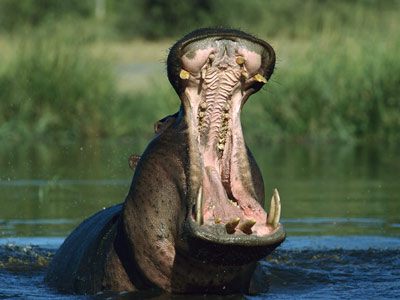