by Nathan Chandler Oct 15, 2018
Whether an elephant is young or old, it will have cracked scaly skin -- for a good reason. Digital Vision/Getty Images

Unlike most newborn creatures, elephants look geriatric right out of the womb, thanks in large part to their loose-fitting, wrinkly skin. But elephants aren't manipulating the system to collect Social Security early – their cracked skin is a clever evolutionary adaptation that protects the animals from the sun's intense rays.

African bush elephants are pachyderms (based on Greek word that means "having thick skin"), a group of large animals like hippos and rhinoceroses. These enormous warm-blooded animals can weigh around 11 tons (9.8 metric tons) and measure up to 13 feet tall (3.9 meters) at the shoulder. In short, it's a lot of flesh and bone, all baking in and absorbing often brutal African heat. And as it turns out, elephants can't sweat. Are you perspiring with sympathy yet?

Michel Milinkovitch, professor at the Department of Genetics and Evolution in the University of Geneva (UNIGE) Faculty of Science and group leader at the SIB Swiss Institute of Bioinformatics, led a team of researchers that went more than skin deep in their studies of pachyderm epidermis. Using light and electron microscopes, along with intricately detailed computing modeling, the researchers were able to determine the cause of the scaly skin. (Their research was published in the journal Nature Communications on Oct. 2. 2018).

For starters, the scientists found that the crackled appearance of elephant skin, is not a sign of aging or skin shrinkage, as is often the case with other species. Rather, it is a purposeful design resulting from the stress of the skin bending. These cracks allow the skin to retain moisture and dirt, which reduces the harmful effects of the sun and prevents wild swings in body temperature. The barrier also wards off some types of pests and parasites.

Elephant skin, unlike human skin, is resistant to shedding, so the layers – particularly the super-tough top layer, the stratum corneum -- stick around longer before sloughing off. It also has a lot more keratin (the stuff that makes up fingernails) than human skin, so it's more durable. As this thick hide is subject to everyday movement, like bending and twisting, it quickly wrinkles, with layer upon layer of wrinkly skin serving as a complex system of channels that capture and hold moisture and dirt.

A closeup of an elephant's skin.
Jose A. Bernat Bacete/Getty Images

So when you see elephants basking in sloppy pools, spraying water and mud to and fro, they aren't just doing it for the hilarity. The filthy goo settles into the teensy cracks in their skin, some of which are just a micrometer across, about 50 times smaller than the naked human eye can detect. Continually wetted, the skin remains permeable, helping the animals stay cooler.

Interestingly, elephant skin doesn't just randomly wrinkle — it cracks in geometric shapes that approximate other common sights in our world, from drying mud to heat-shattered asphalt, or even geometrically precise rock breakage like the Giant's Causeway in Ireland. The result is a durable cooling system that keeps these gigantic mammals from cooking in their own thick skin on steamy summer days.

Now That's Interesting
With their huge bodies and constant sun exposure it would be easy to assume that elephants often fall victim to skin cancer and its side effects. But as it turns out, cancer is relatively rare in these animals. Thanks in part to a gene called P53, elephant body chemistry identifies DNA abnormalities and then nixes cells that seem doomed to tumors. Scientists are studying these so-called "zombie genes" to see how they might affect human biology, too. 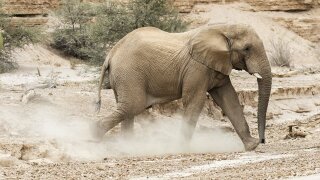 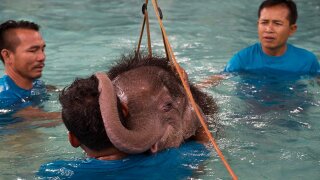