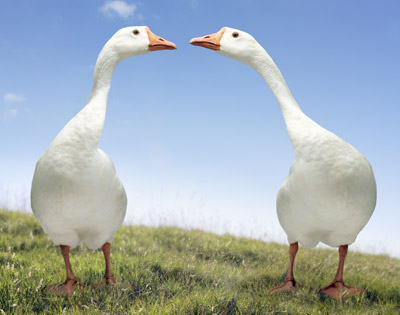 For every 100 marriages in Iceland, there are 31 divorces; in Belgium, the divorce rate is almost 60 percent; and for every two marriages in the United States, another one falls apart [source: CDC, NationMaster.com]. Perhaps humans could learn a thing or two from the birds on this one: More than 90 percent of all birds are monogamous, meaning they maintain an essentially exclusive relationship, or pair bond, with just one member of the opposite sex [source: Gill].

Geese are especially fastidious when it comes to their loyalty. They're well known for the long-term pair bonds they form. So what's their secret? What makes these water birds so successful in their relationships, and why would geese mate for life?

As nice as it would be to attribute the birds' success to their undying love for one another, it's probably just pure and simple selfishness. In his Second Edition of Ornithology, Frank Gill concludes that monogamous relationships may simply be "a temporary truce between selfish, competitive individuals" rather than a "spirited, cooperative partnership."

The reason for this is relatively straightforward -- mating systems are generally determined by whichever arrangement maximizes the participants' breeding opportunities. In the case of monogamy, a relatively exclusive relationship appears to be the optimal arrangement for both sexes.

Just like human relationships, avian pairings involve a series of sacrifices and tradeoffs. Although the gander may be tempted to stray and arrange a few trysts on the side, doing so would leave his own partner vulnerable to other males. Such adulterous behavior could also incite his partner to either desert him or avenge herself by having a fling of her own -- thus diluting his paternal contribution to the upcoming brood [source: Gill].

In addition, time spent flirting with other geese takes away from the important task of helping to care for the young. Similarly, females tempted to stray risk alienating their mates and being forced to raise the brood alone. Unlike other animals such as reptiles, adult birds don't just take off once the eggs are laid.

This isn't to say, however, that geese -- or birds, for that matter -- are as virtuous as they may seem. DNA testing has shown that in some cases, male birds unknowingly raise young that aren't even related to them, up to 40 percent of the chicks [source: Holladay]. These studies have shown that a large percentage of "monogamous" birds occasionally engage in extra-pair copulations. Essentially, socially monogamous animals create strong domestic partnerships with one mate but aren't always faithful. 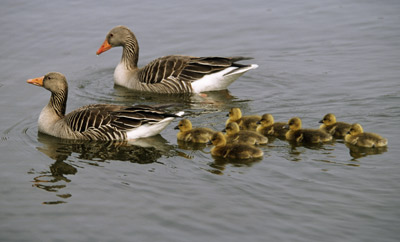 Why Does the Kookaburra Laugh?
Can Different Bird Species 'Talk' with Each Other?
Why Birds of a Feather Mob Together